3 Best Android Apps to Remove China Apps from your phone

After Indo-China border tension, people called to Boycott China apps. So, I wrote an article on popular Chinese apps and their alternatives. So, people can easily check if they are using a Chinese app and replace it with a non-Chinese app. After the Indian government blocked 118 apps including PUBG, we saw a few good apps on the Play Store that helps people easily replace a Chinese app with a non-chines alternative. In this article, I will tell you about 3 good Android apps that help you remove China apps from your phone. If you also do not want any Chinese app on your phone, Install any of these apps to identify the Chinese app on your phone and replace it with a better app.

Before I tell you about remove China apps, you should know that these apps don’t follow Google’s Play Store policies. So, it has removed several apps that helped users deleting Chinese apps. The first app called Remove China Apps quickly got 5 million downloads but Google removed it from the Play Store.

“We also recently suspended a number of apps for violating the policy that we don’t allow an app that ‘encourages or incentivizes users into removing or disabling third-party apps or modifying device settings or features unless it is part of a verifiable security service’,” said Google.

Google has removed some apps and some of these apps may not be available for a long time. In case you encounter a broken link, notify me and I will surely try to replace it with another similar good app.

How do Remove China Apps work?

Apps that promise to find out Chinese apps in your phone basically make a list of installed apps and then check their package name against the Chinese apps’ database. So, the efficiency of the app depends on the database. If the app developer has done good research, the app will work better.

Google doesn’t want these apps to be on Play Store, so most of the apps are not more. That is the reason this list just has 3 apps. 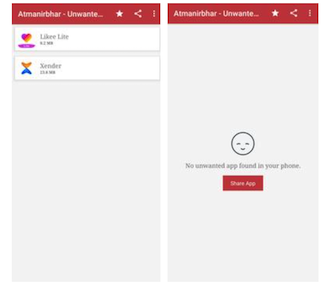 Atmanirbhar app by Zeal Mobiles automatically checked for installed apps and then shows Chinese apps on the app home screen. So, you know what Chinese apps are there on your phone. Then you can uninstall these apps quickly using the delete icon in front of the App’s name. The app works fine and can detect most Chinese apps.

This app has already been removed from the Play Store, but it is available on a trusted APK download website APKpure. So, you can install the app using the APK. 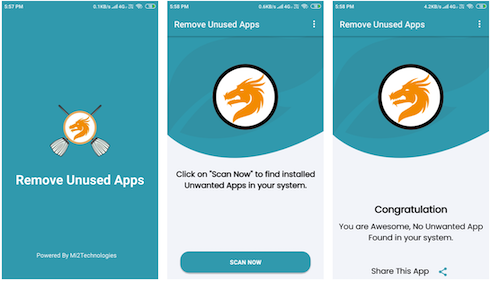 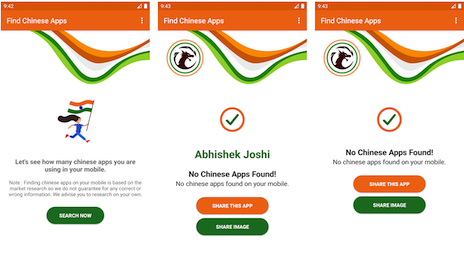 If you are looking for the original Remove China Apps made by the developers behind Mitron app, you are out of luck. The app is no more. But there are some similar apps that you can still try to find out Chinese apps on your phone. I tested all the apps I could find and made this list. These apps work fine and can detect most Chinese apps. Atmanirbhar app is the best. Even after it has been removed from the Play Store, it is still available on the APKPure. Download the APK and install it on your phone.