While it is rumoured that OnePlus 3 will be available in 2 variants with 4GB & 6GB of RAM, it is still not confirmed. The newspaper only carried information about 6GB RAM model. 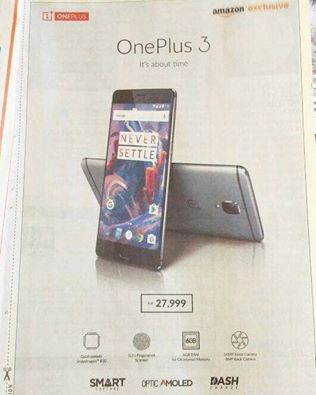 It will also come with a faster fingerprint sensor which claims to unlock the phone. This advertisement also confirms the same design what we saw in earlier leaks.

OnePlus 3 is powered by Snapdragon 820 processor. It is packed with 16-megapixel front cameras and an 8-megapixel rear camera. So, people who need a phone with the good camera can now rejoice. There will be three storage variants: 32GB, 64GB, and 128GB.