Few days back, India’s biggest e-commerce platform Flipkart held ‘The Big Billion day’ sale. This sale was app only and most of the people did festive season shopping in this sale. This sale was a big hit for the company and it sold mobile phones worth $2000 million (Rs. 13000 crores) during the five-day sale.

Not just this, the sale also revealed few more surprising things. Most of the online shoppers grabbed mobile phones in this sale. Flipkart confirmed that mobile phone sales accounted for two-thirds of all products sold during Big Billion. If we more dig on the stats, 250 mobile phones every minute, of which 190 were 4G phones. Almost 80% phones sold were 4G enabled. Flipkart also confirmed that around 80% phones sold were priced below Rs. 10000.

“Today, three of four phones, which we sell on Flipkart are 4G phones,” said Nagori. “About 80 percent of the sale of mobile phones that happened during Big Billion Days were actually 4G phones. Overall, 80 percent of the phones sold would be under Rs 10,000 range.”

Not just in the number of sales, this sale was also very successful in creating social media buzz. Over 250,000 Tweets were shared by users during the 5-day sale. Flipkart app was on the top of the play store’s popular app list. Even it is still at the second spot today. 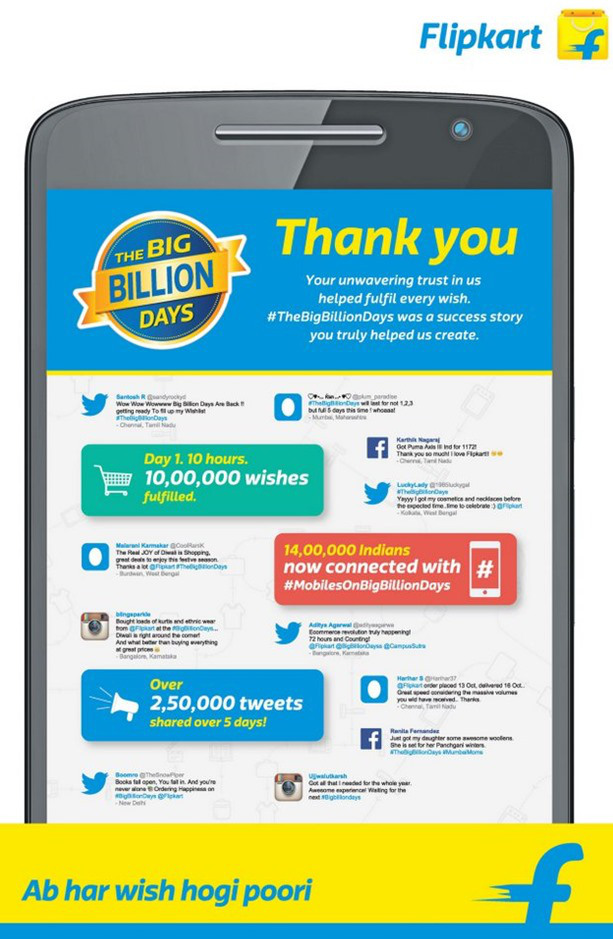 If we compare these stats with last year’s one-day Big Billion Day sale, it sold $60 million worth of mobile phones.