The telecom giant MTS India has announced to launch its Android smartphone in India named MTS Blaze 4.5. The smartphone is the part of Blaze series. It is priced at Rs 9,999. The users will also get 100,000 MB of free data but they have to first recharge it with Rs 198 to get this free data. The data will be valid for 1 year and that is very nice offer provided by MTS India. 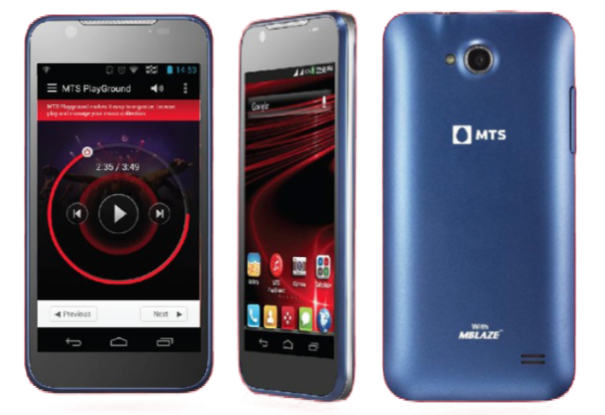 Talking about the features, MTS Blaze 4.5 has a 4.5-inch FWVGA display. It is powered with 1.2GHz Qualcomm Snapdragon quad-core processor. Talking about the photo clicking abilities, MTS Blaze 4.5 has 5MP rear or back facing camera. It is also equipped with 0.3 MP front facing camera. The smartphone comes with a  CDMA/ GSM dual-SIM support. Other features include 1GB of RAM and 4GB of internal storage. The smartphone will run on  Android 4.1.2. Talking about the connectivity options it has  EVDO Rev A, Bluetooth, and Wi-Fi.

MTS Blaze 4.5 comes with  Live TV streaming and integrated music player. It has a piano lock and by this user can lock the device and plays the three keys that are there on the home screen in order to unlock it. The battery backup seems quite ok as it a 1600 mAh battery.