Lava launched a new Tablet for Indian market named Lava QPAD e704. It has entry level specifications that will be described later. The tablet is priced at Rs 9,999. The firm has said that the tablet will go on sale from next onwards but right you can pre order the tablet at Flipkart which is exclusively carrying it for the first two weeks. 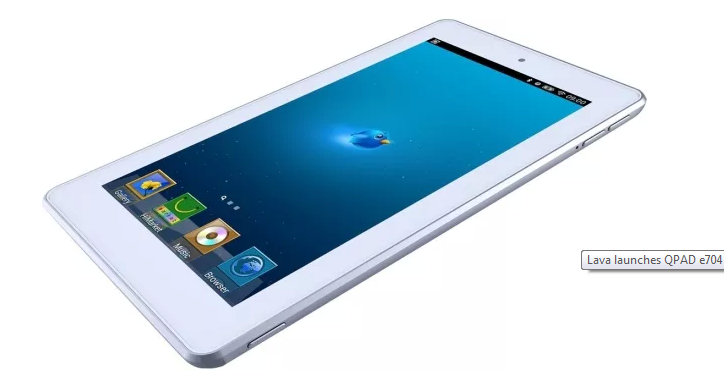 Talking about the features, Lava QPAD e704 has a 7-inch 1024x600p display. It is powered by a 1.2GHz quad-core Broadcom 28155 processor. The tablet will run on Android 4.2. Talking about the photography, Lava QPAD e704 has only 3MP rear or back facing camera. The tablet has 0.3MP front facing camera. The battery backup of the tablet seems good as it has 3500 mAh battery. It also Dual SIM support with Dual standby. Other features include 1GB of RAM and 4GB of internal storage that can be expanded with microSD card slot.

At the launch, S.N. Rai, Co-founder & Director, Lava International said, “Lava International is aiming to expand its tablet portfolio with the launch of new tablets and our latest offering, QPAD is a step in that direction. The idea is to provide users with the best in class devices and to engage them with a stylish quality product that meets their requirements of technology, connectivity and entertainment. By virtue of its fast processor, better graphics, IPS display and longer battery QPAD e704 can be perfect replacement for Notebooks used for presentations, demo videos, catalogues, and enterprise specific applications,”