It seems that HTC Wildfire got 30% price cut. It is now available for Rs. 10,,999 via Indian online retailers Flipkart and Saholic. This device was launched with the price tag of Rs. 14,700. Flipkart is selling this smartphone for Rs. 11,300 and Rs. 13,499 respectively. 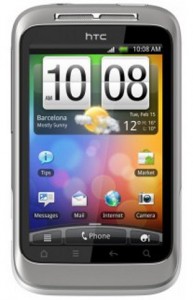 HTC Wildfire S is the upgraded version of HTC wildfire launched in May last year. It is powered by 600 MHz processor and runs on Android 2.3 Gingerbread OS. It features a 3.2-inch Gorilla Glass covered touchscreen with a 320×480 resolution. It has 512 MB Ram and Rom. Internal storage is expandable upto 32 GB via microSd card. This device has a 5 mega pixel camera with LED flash. Camera features Geo-tagging and face detection.

It is packed with standard battery Li-ion 1230 mHh battery which gives 360 hours stand by time on 2G network and 570 hours on 3G network.

Some of the key specifications of of the HTC Wildfire S are: