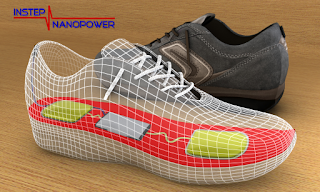 Energy-harvesting technology isn’t new. A new method developed by researchers Tom Krupenkin and J. Ashley Taylor at the University of Wisconsin-Madison promises a practical way to power smartphones and other portable electronics simply by walking down the street.

The two engineering researchers point out in a recent nature communication article, their new energy-harvesting technology aims to provide for a market not being represented by current energy harvesting methods.

“What has been lacking is a mechanical-to-electrical energy conversion technology that would work well for this type of application [mobile electronic devices],” said Krupenkin.

The new method Krupenkin and Taylor have created is a process called reverse electrowetting which converts energy from moving liquid. Their device is made up of thousands of microscopic liquid droplets—they use a liquid metal alloy used in thermometers—which interacts with a nano structured substrate.

The researchers say that humans produce a lot of energy; we can produce as much as a kilowatt of power by sprinting, and only a fraction of that energy is needed to power devices . There have have been previous attempts to harvest power from human locomotion like the 2008 knee brace but they were impractical.

The Wisconsin-Madison Researchers believe that by inserting their device into a pair of shoes, a person could generate up to 20 watts of electrical energy. That energy could then be used to charge devices by plugging in to a small USB port into the shoes. Another method would be to create a tiny Wi-Fi hotspot in the shoe device which would take the load off a phone’s battery. Krupenkin says that this could extend battery life to a month rather than just a day or two.

The device could be very practical in impoverished countries with poor access to electricity, or for military personnel. The product isn’t available yet, but the two are looking to commercialize through their Instep Nanopower company.