Apple’s iPhone in 2017 to come with ‘all-glass’ chassis

All of are awaiting the upcoming Apple iPhone 7 which is set to release this September. According to the reports, the latest iPhone 7 will come with an aluminium body built like the last year however a glass iPhone with an OLED curved edge display is expected to launch in 2017, which dates to Apple iPhone’s 10th anniversary

According to the list of patents published on Patently Apple, one of them talks of an iPhone with a curved display with active virtual buttons. Apple patent number 9,411,451, which dates back to 2013 also talks about its curved display for a smartphone.  Apple is considered working on various secret projects and products years in advance, and only launches them when the technology reaches a stage of accepting their products. 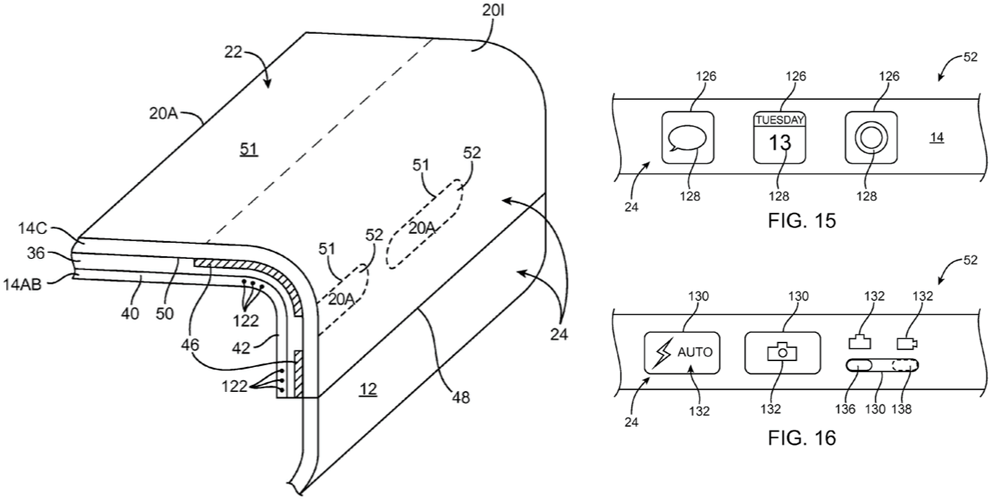 The reports suggest that a curved display edge is also mentioned in the patent  which will work as an additional display to increase the main front display, and these virtual buttons may rely on many types of feedbacks for an example- haptic and audio feedback. It also says such flexible display can be “formed using flexible organic light-emitting diode (OLED) display technology,” another feature which is rumoured to arrive in the next generation iPhones.

The patent also reads that the “edge displays may be used to display scrollable lists such as artist or song lists, etc,” and a user can scroll the information on this edge display horizontally or vertically. This feature is very much similar to the edge display in Samsung’s recent phone models such as Note Edge, Galaxy S6, S7 edge. Many would raise an eyebrow to Apple copying Samsungs’s features but it must be noted that Apple was the first one to apply for this patent in May 2014, long before the release of phone models mentioned above.

After hearing about glass made phones, we can think of it to be something like iPhone 4s with a glass back but, no. Apple is working on the iPhone fully made out of glass including the front, back and sides as well. Foxconn Technology Group, is developing a glass casing chasis as its key client is Apple Inc.

Determined to secure its position as a key iPhone assembler, Foxconn is developing its glass casing technology. “Foxconn has been trying glass chassis since last year,” a person with knowledge of the Apple supply chain in Taiwan said.

It would be interesting to see the users’ reaction to this rip off feature. Such an iPhone sounds vastly different from the current iPhone 6, 6s series which still has physical buttons and an aluminium body frame. Apple is sticking with a similar design for its upcoming iPhone 7 as mentioned before but that is rumoured to have a few changes too. The biggest rumour about the latest iPhone is the absence of audio jack in it.

As we all know, hardly we have ever seen Apple come out with the actual existence of the products which they patent but Patently Apple does note that the patent has been revised three times in 15 months, suggesting that it maybe this time Apple is working on something really big.

You can just think about how difficult it would be to make an all-glass iPhone. This clearly shows that the company is trying its best in the field of technology and innovation but the matter of fact is whether the customer will like it or not. Apple has already seen a downfall with their previous models of iPhone including the iPhone 6s and iPhone SE. If you have any thoughts on the latest upcoming iPhone 7 and think it is worth a share, please comment down.