MacKeeper is one of the popular utility software suits for Mac that offers tools to keep your Macbook clean, secure and optimized.

While Mackeeper claims a lot, this tool has always been in controversy for its bad advertising practices. Many people who somehow bought the tool never had a good experience. This is the reason you can find lots of tutorials on “how to install MacKeeper,”  “How to get rid of MacKeeper”and “Is MacKeeper Really A Scam?”

Now Kromtech, owner of Mackeeper has started doing another wrong thing to hurt its reputation. Recently, they sent a threatening email to a 14-years old YouTuber for his negative videos on Mackeeper. Luqman Wadood, the creator of the video series, posted a set of videos called as “MacKeeper Sucks” and “MacKeeper is a scam”. Kromtech wants these videos to be deleted.

Here is the copy of email Luqman Wadood received from Kromtech’s legal department: 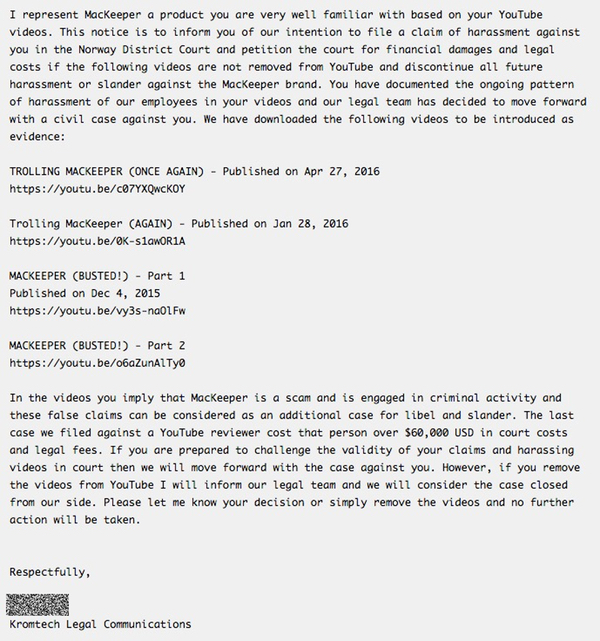 Luqman has made all videos private except one which is still viewable. He thinks that company is trying to blackmail him just because they are big to send legal notices. He also posted a response on YouTube.

The company is doing it wrong by sending legal notices to YouTuber who posted negative reviews. MacKeeper gave bad experiences to its users. Not just this, company carelessly left millions of Mac users’ details exposed on the net. This is the reason, there are so many people who are not the fan of this tool.

The company made haters because of its wrong advertising practices and pushing too many ads to their users’ computers. It also blames affiliates for those ads

Not just this YouTuber, there are so many people who criticized Zeobit’s (original creator of MacKeeper) marketing and promotional techniques. Later Kromtech buys MacKeeper and it also attracted criticism for that. It pays 50% commission to affiliates. So, affiliate bundles MacKeeer ads into adware to attract more sale. Users blame MacKeeper for this mess.

It is worth to point out that Kromtech already filed at least two unsuccessful lawsuits against those who it blames for defamation. The company also filed the law suit against David A. Cox for his video on YouTube, but the judge dismissed the case for lack of personal jurisdiction.

It seems Kromtech has not learned from past mistakes. YouTubers of reviewers saying bad about software is not a problem. It all started just because of bad advertising practices which people faced.

Sending legal notice is not a fix. The company should try to improve the user experience of its software.