The Korean giant Samsung announced its earnings guide for Q3 2014. According to the earning guide, the firm is heading towards a big loss since 2011. The main reason behind the Samsung downfall considered to be rise of Chinese smartphones. The Chinese smartphone  makers including Xiaomi, Lenovo and Huawei have gained a nice popularity.  Samsung said that their operating profit will fall by at least 60 percent. If we consider previous Quarter. It is assumed that Samsung increased marketing cost and fall in product prices are reasons  for the downfall in the firm profit. Samsung will give the details by the end of this month. 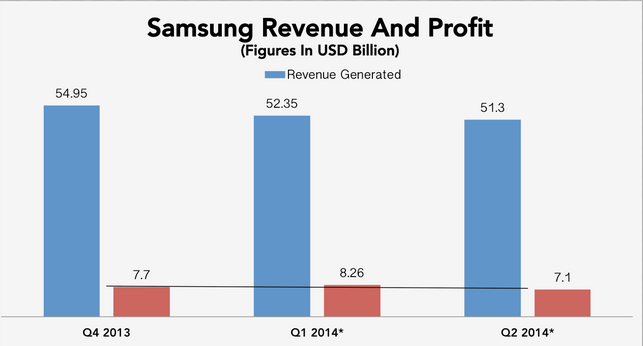 Talking about the revenue, Samsung has said at the regulatory filing that the operating profit of the firm will see a fall of 59.7 percent to 4.1 trillion won last year. This will be the weakest phase of the firm since 2011 and also fourth consecutive year of falling profit. There is one more reason for the declining Samsung’s profit and that is weak demand for wireless devices. This has put a large effect on Samsung logic chip business. The global competition led the firm to cut the price of its high end smartphones. Samsung has kept its eyes in the fourth Quarter with its much awaited smartphone Samsung Galaxy Note 4.  The firm will face a tough competition from Apple’s new iPhone 6 Plus  and also Chinese rivals like Xiaomi and Huawei. Xiaomi had already announced that it will bring back Xiaomi Mi 3 back in India this Diwali. The smartphone has received  very good response in India. Chinese smartphone makers are also focusing the Global market with best features in cheap prices. So consumers are also tilting towards their  products. Samsung has sold about 11 million Samsung Galaxy S5 smartphones in the third quarter which has seen a large drop as compared to second quarter in which Samsung has sold about 18 million Samsung Galaxy S5.

Samsung needs to design a new strategy for its mid and low end smartphones in terms of the features and price. These two factors affects the consumer very much. It is also said that the downfall will continue in the next Quarter. Samsung is planning to re-release its mid and low end smartphones. They are made of using new materials. Samsung will also try to expand its component suppliers including for OLED screens. The company will report its actual earnings later this month.

According to HMC Investment analyst Greg Roh,  Samsung average smartphone selling price has fell from $224 in the third Quarter to $301 that was there in the second Quarter. On the contrary, Apple’s average sales is set to rise to $605 as compared to $580 that was there in the previous Quarter. This jump is expected due to release of the new iPhone 6. Samsung chip division can be the brighter side as it is gaining in this Quarter due to high demand. Samsung is all set to invest $14.7 billion on a new chip set factory near Seoul. This is the brightest investment  as it is also concentrating on its semiconductor business. This will help the firm maintain the loses that they are getting in smartphone business. Samsung will give the details by the end of this month.