According to TechCrunch, Facebook is in talks with drone maker company, Titan Aerospace to further propel its Internet.org initiative. The deal will cost Facebook $60 million, according to ‘a source with access to information about the deal’, said the TechCrunch report. 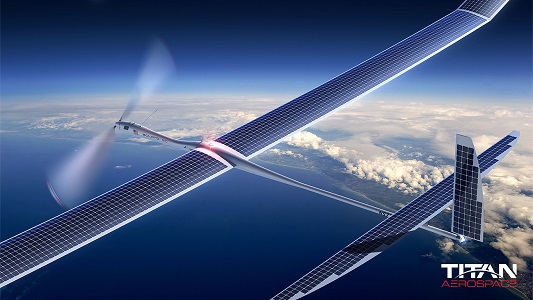 Facebook plans to use these drones to provide internet access to remote parts of the world. These parts include under-developed and developing countries of Africa and others. At the Mobile World Congress held in February this year, Mark Zuckerberg on behalf of other members of Internet.org discussed about the efforts put to bring internet to the two-thirds of the world’s population not yet connected. So planning to acquire Titan Aerospace seems to be another step towards providing internet access to ‘not yet connected’ parts of the world.

The drones can be used for various purposes like weather analysis, prediction of disaster and earth imagining, but Facebook is especially interested in communications. These planes can be loaded with about 250 pounds of gear which include equipment for internet connection. The services that will be provided with the help of these ‘air-borne internet supplying drones’ include Wikipedia, whether information, Facebook (its obvious) and WhatsApp.

The quality of the internet signal can guessed to be considerably weak owing to the fact that these drones will fly far above the surface of the earth. Therefore a need arises to develop communication technology that will enable us to use internet with weak signal reception. Facebook is already working in that regard to compress the data sent to and from WhatsApp to make the service faster and use less data downloading.

These autonomous man-less aircraft manufactured by Titan Aerospace are high end drones that can fly at an altitude of about 20Km above sea level. Also once launched into the outer atmosphere, these craft can fly for five or more years before being refuelled again. Of course, to support the drones power supply when it is air-borne, solar panels are fitted on it. Facebook plans to build around 11,000 of these aircraft, its special interest being in the manufacture of ‘Solara 60’.

It is not the first time that anyone has thought of providing the world with free internet. Google’s Research and Development has already suggested that souped-up balloons be used to provide Wi-Fi connection to the remote parts of the world.

Personally I believe that if anything like this comes to existence in the near future, people will benefit from this service a lot. However, providing free internet to use services like Facebook and WhatsApp will have adverse effect on the population. I can bet that anyone with a mobile phone will then have a WhatsApp and Facebook account and become a victim of social-media addict. The aim of doing a mass betterment by providing free internet to use Wikipedia will be lost.