Dropbox has updated its app for Android devices. This new update is called version 2.2 and it brings few enhancements and new features. Now users can enjoy photos and videos on the go. 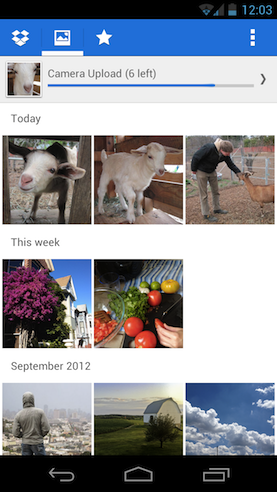 “We’ve created a new photos gallery in our Dropbox Android app that puts your pictures front and centre and displays them beautifully,” Tony Grue from Dropbox wrote in a blog post.

“Now it’s even easier to flip through all of the photos you’ve automatically uploaded to Dropbox and share them in a snap! And since our Camera Upload feature lets you gather all your photos in one spot, you’ll even see pictures you’ve taken with other cameras,” He added.

These are the main changes in this new version