Today, Samsung has launched its latest Samsung Galaxy S3 LTE In Korea through three major Korean mobile carriers. On the first day of launch, It got a huge response from customers and Samsung has sold more than 50,000 devices.

Samsung Galaxy S3 is available from all the three major carriers SK Telecom (SKT), Korea Telecom (KT) and LG U+ in Korea. 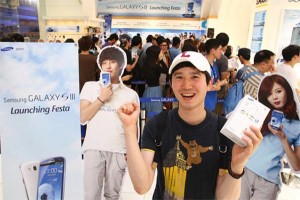 “First day of sale 9 Up Customer oriented sales job reservation has been made mainly due to the opening of regular customers since the beginning of the 10th is expected to further increase sales,” Samsung official said.

Samsung has launched Galaxy s3 in Kora Last month and Galaxy S3 LTE version yesterday. According to the data revealed by the Company, this is the new record sale made by any Samsung device. Previous records were achieved by Samsung Galaxy S and Galaxy S II with 10,000 and 24,000 units sales respectively on the first day.

Samsung is expecting to score a net profit of $5.91 billion in Q2 2012, with a total revenue of $44.06 billion. And We all know that Samsung galaxy S3 will be a great contributor in the revenue.

Samsung is also expecting to sell more than 10 million Galaxy s3 worldwide. Other low cost Samsung Android smartphone and tablets are also doing well. Android phone are lucky for the company which have shown great performance in the Market.