At Google I/O, Google has also unveiled its first tablet, Nexus 7. This tablet was built by Taiwan’s Asus and will be available for purchase from mid july from Google Play website and App Store. 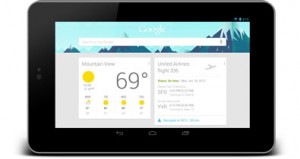 This 7 inch tablet costs only $199 and aimed directly at the popular 7-inch Amazon.

This tablet is powered by 1.3GHz Nvidia Tegra 3 quad-core CPU, which includes a 12-core GPU. It comes with Android 4.1 Jelly Bean, which was also unveiled yesterday. It also has Micro-USB port, 1GB of RAM, a 1.2-megapixel front camera (no back camera included), a gyroscope, GPS, accelerometer, microphone, and 802.11a/b/g/n-compatible Wi-Fi. Google promises the 4325 mAh battery should provide up to 8 hours of use.