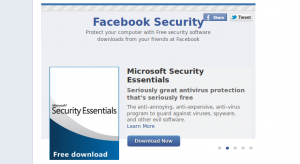 Facebook is the largest social network which recently claimed to have 901 million active users. With these many people, it is the best place for scammers to spread scams and earn some money. So security is the main thing for Facebook. Facebook is also taking security very seriously. But most of the things it had done were not so effective.

Facebook has also blocked many malicious URLs on the websites which gave some better results. But this is not the perfect solution. So Facebook has not adopted a better URL blacklist system with the inclusion of links from five major security software vendors, Microsoft, McAfee, TrendMicro, Sophos and Symantec.

Facebook is also offering free Antivirus solution from these vendors for free. Look at the new Facebook Antivirus Marketplace. The AV Marketplace enables people to download six-month licenses to full versions of antivirus software at no charge