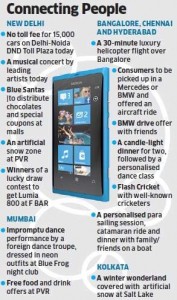 Nokia has just announced that Nokia Lumia 800 and Nokia Lumia 710 are now available in India. Both are windows based smartphones and Nokia has planned a lot with Lumia. You can see the promo of these in your TV and other advertising media.

Nokia had planned a lot for the launch even of the phone in many cities in India. You can see the image and read the detail event plan of major cities.

“It’s a gamechanger for us,” says Nokia India Marketing Director Viral Oza. “We have redefined what we mean to the consumers.” Analysts call it a desperate attempt to reclaim ground in the smartphone market. “Nokia is desperate to make Lumia work,” says Saurabh Uboweja, director of brand consulting and design firm Brands of Desire.

Nokia launch this smartphone to fight with samsung galaxy and apple iPhone. Nokia is loosing market in smartphones so this time, Nokia is using all its power with these windows based smartphones.