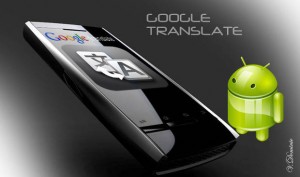 With this feature users have to just write their text on the display of the phone using their finger or stylus and it would be translated into the desired language.

This is not the new feature in market. There are few more apps which work on handwriting inputs, such as CalliGrapher, Graffiti, CellWriter and MyScript. But this new feature with translate tool is great and with Google power as well.

This feature is very useful for those who are not fast in typing on mobile devices. This feature is in early stage and expected to get few more improvement in upcoming days.