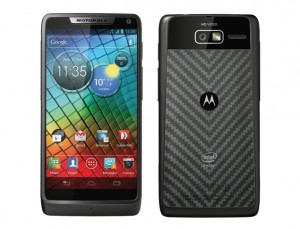 RAZR i also features a 4.3 inch Super AMOLED advance edge to edge display with 960×540 pixel resolution. It also features a 8 megapixel camera which can take 10 shot in a second and is capable of 1080p HD video recording. This smartphone runs on Android 4.0 and is upgradable to Android Jelly Bean. It comes with 1 GB RAM and 5 GB internal storage that is expandable up to 32 GB via microSD card.

It is packed with a 2000 mAh battery that offers 20 hours of usage time.

Motorola said in a statement that the Razr i would launch in October in “select European and Latin American markets including the U.K., France, Germany, Argentina, Brazil and Mexico, with more to be announced.”