Sony Xperia U and Xperia P gets price tag 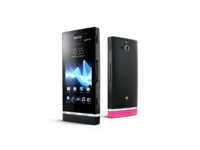 Sony Xperia U is also powered by 1 GHz dual-core processor for super fast performance. It has a 3.5 inhes display which is powered by Mobile BRAVIA Engine. It has a 5 megapixels camera which HD video recording.

Both smartphone comes with Google’s mobile operating system Android 2.3 at launch. Company has also announed to push Android 4.0 update in the second quarter of this year.