While many tech companies are working on smart wearable devices, Microsoft is not far behind. A recent research paper, “Food and Mood: Just-in-Time Support for Emotional Eating,” revealed Microsoft’s new smart Bra. This smart bra can measure your emotional state via sensors and then send a warning to smartphone of you are in thinking to reach for a cookie jar. 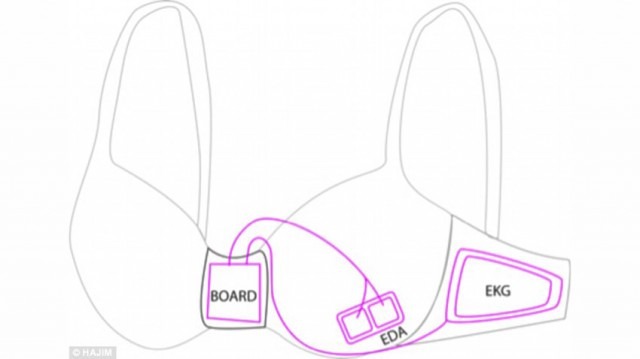 Prototype contains removable sensors that monitors heart and skin activities to record the emotions. It streams the data to phone via Bluetooth

“The bra form-factor was ideal because it allowed us to collect EKG near the heart,” research paper reads.

“Participants wore the bra sensing system and reported their emotions for about 4-6 hours a day over a period of approximately four days. It was very tedious for participants to wear our prototyped sensing system, as the boards had to be recharged every 3-4 hours, which resulted in participants having to ﬁnagle with their wardrobe throughout the day,” research paper revealed about testing of Bra.

Bra could predict emotional states with 75% accuracy which was pretty awesome.

Wearable technology is increasing day by day.Few weeks back, we saw a Bra that can tweet every time it was unhooked. Motorola’s throat Tattoo with mic and Sony’s smart wig technologies are also awesome.