Many people love to travel and experience new places and cultures. This gives them peace in life. Some people also get a chance from the company to travel for business purposes. If you are going anywhere the world, the basic problem that you face is communication if you do not know their language. It is because you have to interact with the local people out there. Although many people understand English the ratio is quite low in local areas. If you planning to visit a new place for a long time, you can think of learning their language.

There are few people who love to learn new languages and increase their vocabulary. We are here with the top best Language learning apps. If you are searching for this app you will thanks us later.

Learning a new language with these free apps will help you learn in a better way with greater confidence. You can use these language learning apps to learn new languages like Spanish, English, French, Italian, German, Irish, Dutch, Russian, Chinese, and many others.

Here are the best free language learning apps that you can use to learn new languages. Duolingo is the easiest way to learn new languages. You can learn several popular languages and I have added the list of those languages below. The app helps in Practicing your reading, speaking, listening, and writing skills while playing a game! You’ll improve your vocabulary of any language and grammar skills related to that language by answering questions and completing lessons. You can easily start learning with basic verbs, phrases, and sentences, and learn new words daily. Duolingo comes with a nice UI and lets you get sources offline. The app starts with basic and then moves ahead with more advanced lessons.

This is one of the best language learning apps for Android and iOS. You can learn and practice as often as you want. If you have thirst for adventure, the potential to learn any language, and if you are about to embark on a life-changing journey then go for this free language learning app.

You can learn several languages including Spanish, French, German, Japanese, Chinese, Portuguese, Russian or even English. You will be taught by real native speakers. So, you will learn how to speak naturally. There are practice games with Speed Review, Listening Skills, Difficult Words, and Classic Review. You can recall yourself and it will tell you if you got it right. So, you can improve your pronunciation in a better way. Busuu tells us that Don’t just learn languages, fall in love with them! You can learn any language like Spanish, English, German, French, Italian, Portuguese, Turkish, Arabic, Polish, Russian, Chinese, and Japanese with the help of over 60 million international native speakers who are learning, practicing, and teaching on Busuu. It has a placement test starting from the right difficulty level. It also offers certification from McGraw-Hill Education. The app offers accent training, grammar tips, exercises, and offline learning. So you have all the things you need to become an expert in a language. 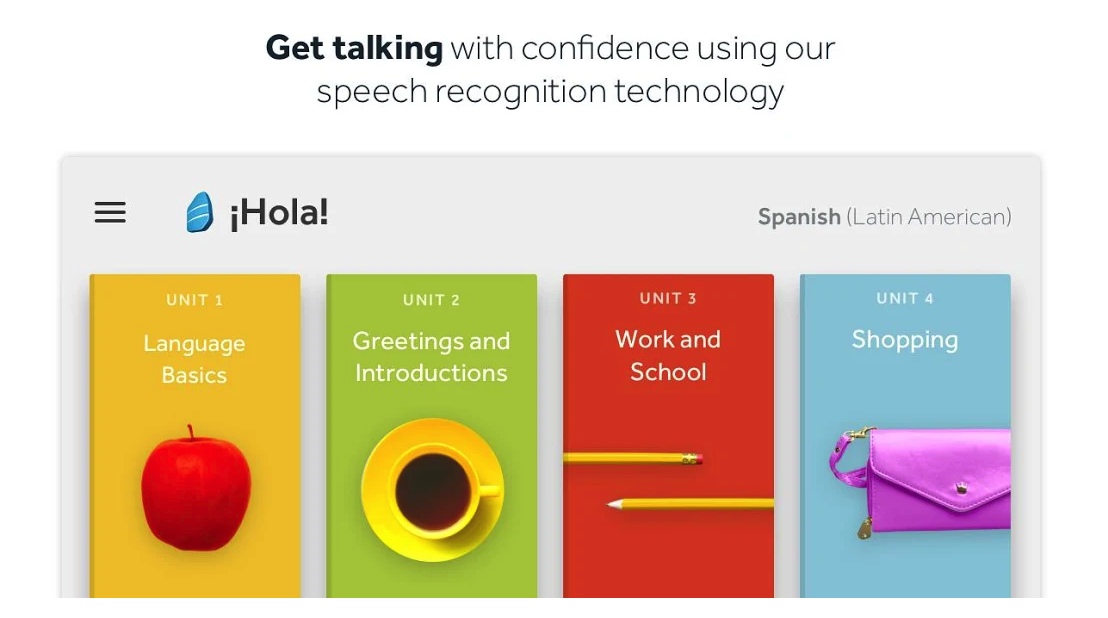 Rosetta Stone is also a popular language learning app and the company behind this app has been teaching languages for 25 years. They offer 24 language training starting from the basics. Listen to works, repeat them and then match photos to phrases. The app shows your progress, so you can improve your pronunciation, vocabulary, and grammar.

The app is free to download but it is a subscription-based learning tool. You will get the first lesson for free. After that, you need to subscribe to a paid subscription. 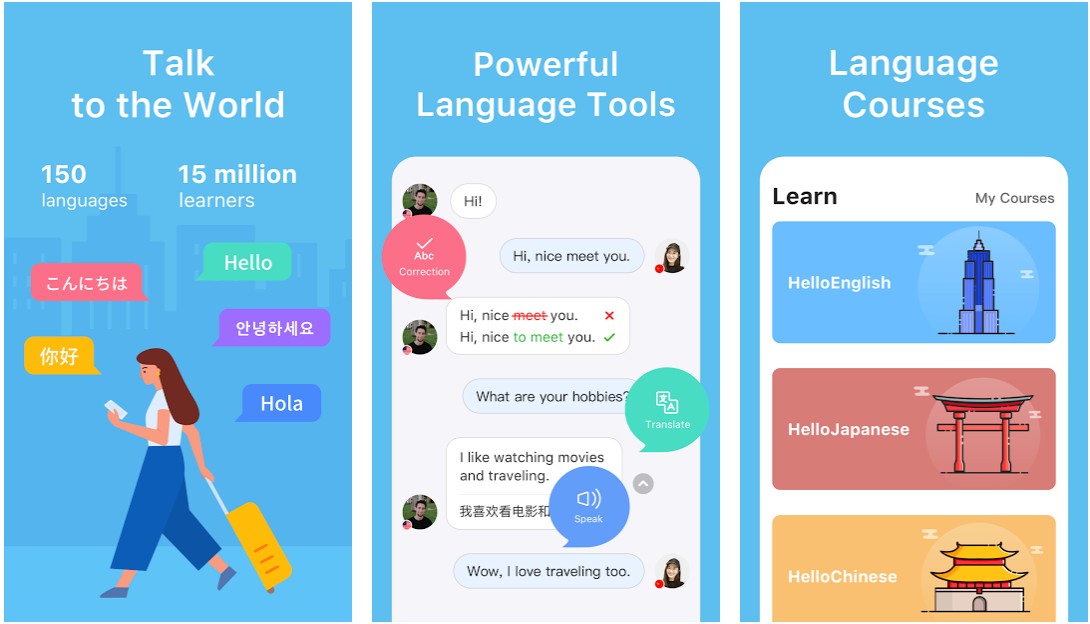 HelloTalk is also one of the best language learning app that connects you with native speakers of other languages for free. So, you can learn a language in a better way. You can engage with native speakers via text/audio/voice messages. There are also free audio and video calls to practice and improve. You can Language translation, transliteration, grammar correction, text to voice, and voice recognition features. Babbel helped millions of people to speak with confidence. It makes learning a language fun and effective. You get interactive lessors to get you speaking a new language with confidence. There are a total of 14 languages available in Babbel including Spanish, French, Italian, and German. This app focuses on the conversation along with words and pronunciation.

Users of Babbel can test the app for free but language packages cost $9.99 and $9.99 depending on the level. 50languages is available in over 50 languages and in approximately 2500 language combinations, e.g. German to English, English to Spanish, Spanish to Chinese, etc. There are 100 lessons that provide you with a basic vocabulary.

Also, you can download the audio files from www.50languages.com to your mp3-player and listen to them anywhere – at a bus stop or a train station, in the car, and during a lunch break! 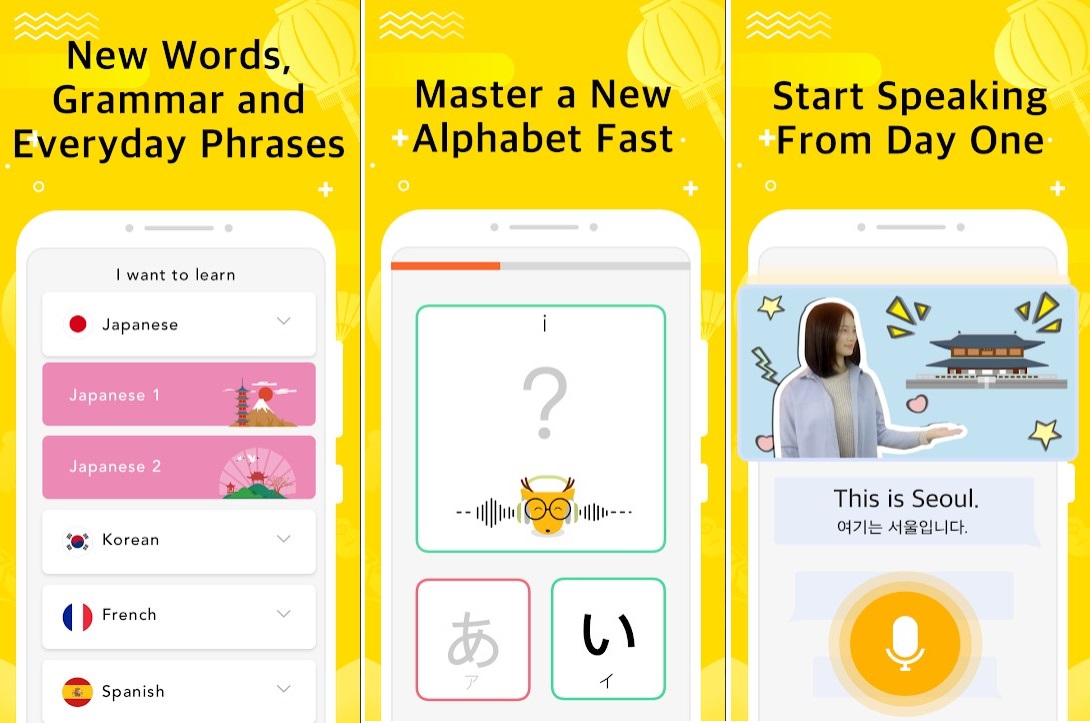 LingoDeer is a language learning app that helps in learning to read and write a language with a unique alphabet system, such as Korean or Japanese. It has all essential vocabulary and grammar from beginner to intermediate levels. It has fun activities like flashcards, quizzes, target training, and more that make learning more interesting. 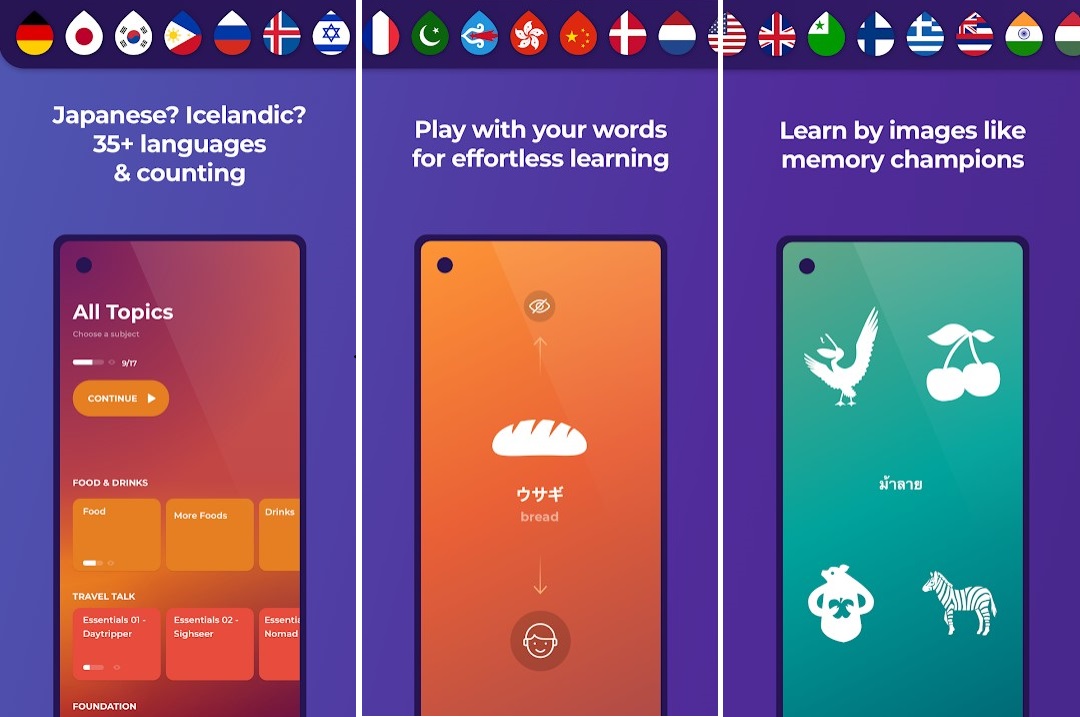 Drops language learning app limits your learning time to 5 minutes. This sounds crazy but chunking down into 5-minute sprints, it makes learning fun. It works on 100% visual learning so that you can connect the new words to the illustration of the meaning. 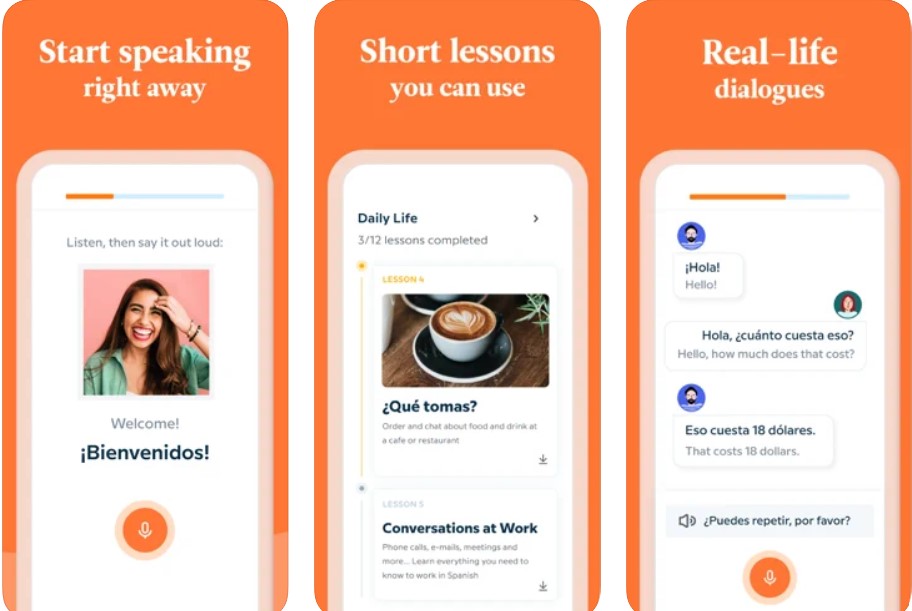 With Babbel learning app, you can learn language lessons for travel, work, everyday life, and much, much more. You can learn more than 13 languages with in-depth content, including more than 60,000 language lessons. You just have to invest 15 minutes per day and after 10 hours you can see better test scores on grammar and vocabulary.