Is WhatsApp coming up with free calling feature?

WhatsApp has come up with updates like privacy options and blue ticks and impressed many of the users. After being acquired by Facebook, WhatsApp got updated with those important features and apart from them, it is now going to provide free calling service. This is expected to be soon. This will make it the super power in apps for smart phones. 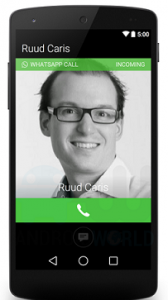 This year in February, founder and CEO of WhatsApp, Jan Koum said that Facebook team is working hard to bring free calling feature in to WhatsApp. This would begin with Android and iPhone initially and later they would proceed for BlackBerry and Windows later. This seems to be true with the following screenshots.

There is no statement or official announcement till now from the WhatsApp, but the information as provided by Androidworld.nl is that it is in testing stage.