Facebook Messenger to soon allow users transfer money to friends. Facebook has already completed its work and ready to make it live soon. According to leaked snapshots and video uploaded by Stanford computer science student Andrew Aude, this feature works fine and ready to be live any time.

This is not the first time when this feature was leaked. Last month, a security researcher Jonathan Zdziarski also discovered the payment code on Messenger. 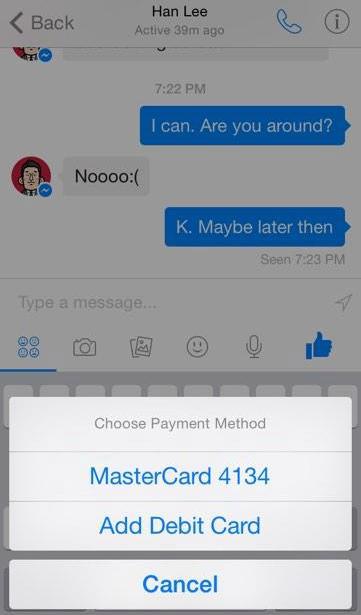 Users will be able to send money in very similar way how they send photos to friends. All you need to add a debit card in messenger. For security reasons, there is also an in-app pincode option. Your transaction will be private and Facebook will not publish it on your news feed.

At this time, there is no transaction charge for money transfer. Aude confirmed that there is no option to use Paypal. But notes in the code was found to confirm that Paypal option will be added soon.

For now, payments will be one person to one person. But not in the code reads that multiple payment option will be added in near future. This feature is expected to come only for US users next month.

At this moment, it is unclear whether Facebook will monetize the payments by charging the small transfer fee or not. This service will compete with PayPal and other peer-to-peer money transfer apps available. Facebook has built this feature under Facebook Messenger’s new head David Marcus. He was the former president of PayPal. So, now it is clear why Facebook hired him.

If payments to Messenger becomes successful, it will give us a new reason to use Facebook Messenger over other messaging apps. This new feature can also be used as Payment method in facebook’s upcoming new feature “Buy Button.” With Buy Button, users will be able to perform ecommerce purchase direct from news feed.

What do you think about this new feature? Share your views with us via comments.