6 Best TV Apps for watching your favorite shows on smartphone

In this digital era, not everyone has access to television for entertainment all the time. There are many people who live in a hostel or in a single room or travel a lot or don’t want to buy one because they use the internet for entertainment. The Internet is booming and grooming day by day and it is replacing televisions these days.

People are preferring to watch TV on the internet instead of actual television. The primary reason for this is the availability of TV channels and entertainment programs on the Internet. So, you can watch television anytime and anywhere. Most people prefer to watch on mobile while traveling or when they don’t have options of a big screen. If you are also one of those who want to use a mobile phone or tablet as a primary entertainment device and ditch the television, you are at the right place.

In this article, I am listing the best TV apps for watching your favorite TV shows on your smartphones.

With Tata Sky Mobile you can take your TV with you everywhere. You can watch Live TV in it. It also gives you options to watch your favorite shows, movies, and videos whenever and wherever you want on your smartphone.

Tata sky TV app has a feature name Transfer service. With the help of it, you can transfer recorded content from the Tata Sky+ Transfer set-up box and watch it anytime. Also, you can use this app to control your Tata Sky set-up box. You can consider YuppTV is as one of the largest online TV platforms with more than 200 Live Indian TV Channels. It has almost all the regional language channels. It has 7 days of catch-up TV, the Latest Regional, and Bollywood/Hindi Movies. Zee Tv and Star TV are not available in India yet but if you want to watch local language channels then this TV app is the best. The app has some of the popular channels like Star Plus, Aaj Tak, NDTV India, Tez News, MTV India, Colors, Sony TV, Zee TV, UTV Movies, Star Bharat, Set Max, Zee Cinema, SUB TV, MTunes, &TV, 9XM, Music India, SONY MAX, Rishtey TV, and Bindass TV. There are also channels in Telugu, Tamil, Malayalam, Kannada, Bengali, Marathi, and Punjabi languages. Hotstar app gives live scores and the latest updates of any sports. It also gives free streaming of videos and video highlights. Shows for normal users are available after few hours and for premium members, it gives live streaming.

SonyLiv is another popular app that brings several TV channels to your smartphone. You can catch love sports, and TV shows such as KBC, The Kapil Sharma Show, CID, Taarak Mehta Ka Ooltah Chashmah, Indian Idol, and more. The app boasts 40,000+ hours of binge-worthy content, TV Shows, Movies, LIVE Channels. You can stream your favorite Sony network channels, LIVE on the LIV app. 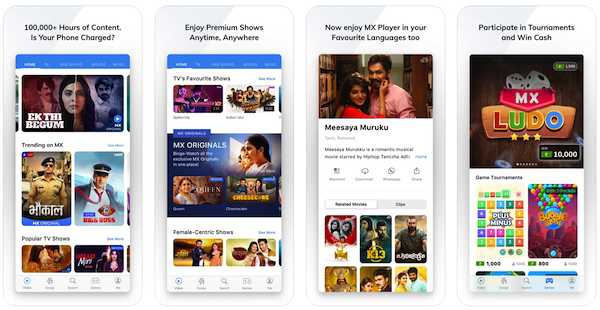 MXPlayer is also one of the best apps to watch Movies, TV Shows, Web series, and TV shows on your smartphone. The app includes top shows such as Bigg Boss, The Kapil Sharma Show, and KBC along with several MX Originals. Overall, the app promises to offer 100,000+ hours of content across Movies, TV Shows, Web series, Music Videos, Sports, and News.

If you are using any other TV app that is good enough to make the entry in this list, please let us know about that. You can either use the contact page to tell us or just comment below. I will surely consider that app and update this article with more relevant information.