CS: GO or Counter-Strike: Global Offensive is one of the most popular multiplayer first-person shooter game. The game was released back in August 2012 for multiple platforms and is still popular among gamers. CS: Go recorded over 1.3 million players playing the game at a time on April 17, 2020. The game has a competitive matchmaking game where you can play 5 v 5 matches. Based on the performance of players, they get a rank called CS: GO Rank. A player’s CS: GO Rank confirms his/her skill. There are 18 different ranks. The better you play and the more games you win, the better rank you get. Here is the breakdown of the CS: GO ranking system

Silver I is the lowest rank and Global Elite is the rank for the best player in competitive Counter-Strike: Global Offensive. Each rank has an icon that is shown on the profile. So, you also need to know the rank icon, to identify the rank of a player. Here is the icon if each rank. 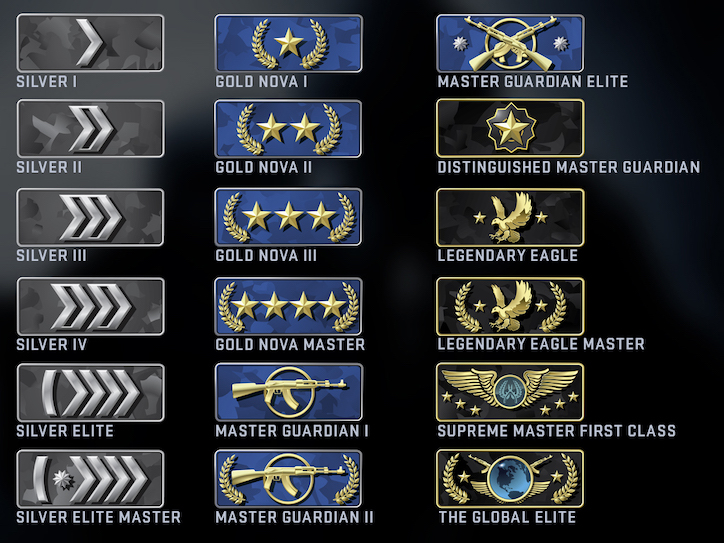 This rank is used for matchmaking. Because CS: GO ranks players with similar ranks. Silver Players are matches with other silver players. Basically, a player is ranked with players with 2 higher or 2 lower ranks. If you keep winning and performing well, you will be ranked up.

This rank is used for matchmaking. Because CS: GO ranks players with similar ranks. Silver Players are matches with other silver players. Basically, a player is ranked with players with 2 higher or 2 lower ranks. If you keep winning and performing well, you will be ranked up.

Silver is the beginner rank. According to reports, around 33% of the players are found in silver. Silver players have less understanding of the game, not much accurate aim, not accurate in grandees, and low co-operation with other teammates. Players who are ranked from Gold Nova I to Master Guardian Elite have an understanding of the game. They know maps, the aim is better, and play with well-coordinated teamwork. Better the rank, better the gameplay. Players who are ranked in between Distinguished Master Guardian The Global Elite are the players who have absolutely accurate shots, can predict the position of opponents, throw accurate games, play with super successful strategies. The Global Elite rank players are the best CS: GO players in the world. 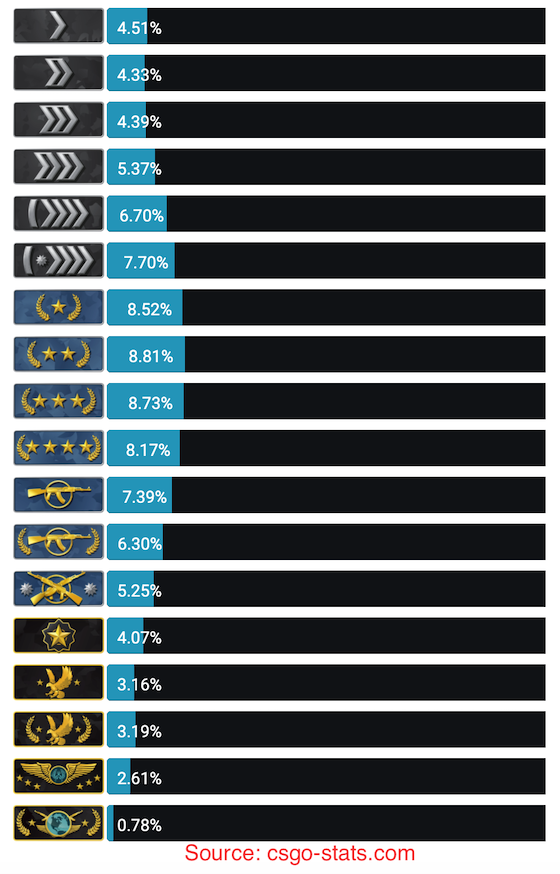 How to get your first CS: GO rank?

If you start playing CS: Go, it will not give you a rank instantly. You will have to first win 10 competitive matches to get your first rank. In your first 10 wins, the ranking algorithm analyses your game to give you the rank. If you play well, you will start with a Gold rank. Most players remain in the Silver ranks.

For being eligible to play Competitive matchmaking games, you will have to first get a Level 2 steam rank by playing Casual games.

Developers of the game don’t reveal how their algorithm works. This secrecy is to avoid rank manipulation. Match Winning is the key factor. The bigger your win, the better chances of ranking up. For example, winning with a score of 16:14 will have a smaller impact but winning with a 16:3 store will have a better impact. If you are matched with high-ranked opponents and you win the game, the more chances are getting ranked up. There are also several other important factors like MVP awards, K/D ratio, ADR, and your co-operation with teammates. Improve your CS: GO skills to rank faster. Practice on Aim Training maps, learn how to use grenades, learn maps, learn weapons, start checking the radar and learn money management.

If you have won more than 50 games and are still in the silver ranks, you should start giving more time on practice maps and aim improvement maps. This will help you in improving your game.