Chinese smartphone companies have proved themselves by coming out with flagship killer devices at an affordable price in the recent years. Let it be any phone you have, with the features out of this world, there will always be a Chinese phone which will be better at one-third of the price. The second quarter smartphone shipment reports by International Data Corporation (IDC) on Monday show that Huawei, Oppo, and Vivo are at the top three positions in China. All the 3 companies together have a 47% share of the entire Chinese market.

According to the reports, Huawei has surpassed rivals Oppo and Xiaomi to take the top spot on the list. Xiaomi’s 2nd quarter shipment took a 38.4% dip, shipping 10.5 million units of smartphones in the quarter, down from 17.1 million units in the same period last year. This fall has placed Xiaomi behind Huawei, Oppo and Vivo, on the 4th rank. 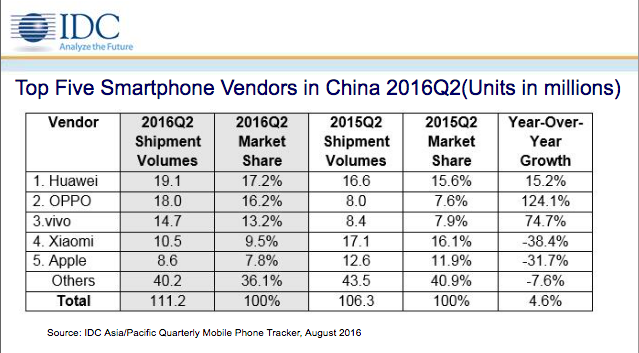 Xiaomi and Apple also come in the top five positions, with the other leftover companies occupying 36.1% of the market, and shipping 40.2 million units of smartphones in Q2 this year. Apple shipped 8.6 million iPhones in the period according to IDC’s data, giving it a 7.8% market share. The IDC report notes the Chinese smartphone market is booming and is always taking the top positions.

The quality, marketing, design and pricing of these Chinese smartphones have managed to take down giants like Apple and Samsung. Apple saw a big decline in its shipments in China by 32% in the second quarter, dropping the brand to 5th position. This sounds as bad news for the iPhone maker as it is expected by many analysts that its market will have a further downfall.

“The launch of the iPhone 6 saw Apple’s shipments in Greater China skyrocket, but the company has struggled to keep up with this momentum. The iPhone 6s and the iPhone SE are unlikely to make a big difference to Apple’s sales this year. Local players offer much better value for money and have also improved product quality and design. Their marketing game is very strong. Huawei, Oppo and Vivo offer products with better specifications at lower prices. The iPhones lack features such as water and dust proofing and wireless or fast charging. Apple needs to catch up with the competition if it wants to compete,” Canalys Research Analyst Jessie Ding said on Monday.

Huawei’s biggest success is seen in the P9, which has been receiving a lot of good reviews in its favour. The Huawei P9 (expected to launch in India on August 17) is the company’s high-end smartphone. It has some unmatchable specifications and features in which the highlight of the device is the dual-lens camera made in partnership with Leica.

Knowing how volatile and dynamic the smartphone market is in China, it will be interesting to see how long Huawei can sustain its top position with Oppo, Vivo, and Xiaomi close behind it. Can Samsung’s latest Note 7 and Apple’s upcoming iPhone 7 secure the top spots in the next quarter?Comment your thoughts.