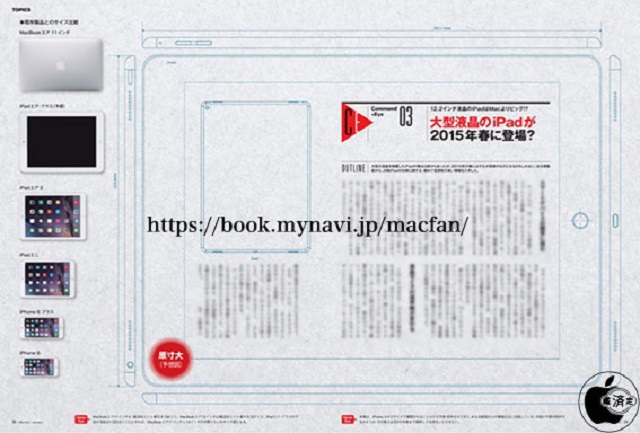 According to Japanese site Mac Fan, Apple is set to release 12.2″ iPad Air Plus next year between April to June 2015. Mac Fan has also leaked a blueprint from its January issue claiming the details of new iPad.

As per the leaked details,larger iPad tablet will measure 305.31×220.8x7mm. It is significantly larger the Samsung Galaxy Note Tab Pro. It will be powered by a next-generation A9 processor. New iPad Air Plus will have four built in speakers on edges for stereo sound. Apple’s latest iPad comes with two speakers located at bottom edge of the chassis. It will also come with a 12.2 inch Retina HD display and just 7 mm thickness.

This larger iPad could replace the need to having notebook for many users. We can also expect this large iPad with a physical keyboard.