Over the years, there have been demands from the people who cannot identify themselves either as male or female to include ‘other’ gender options. Facebook took a courageous step to include such gender options for these ‘status deprived’ people. It now provides 51 other gender options to choose from. However, given the mental setup of the majority, nothing can be said about the success of this bold initiative taken by Facebook. 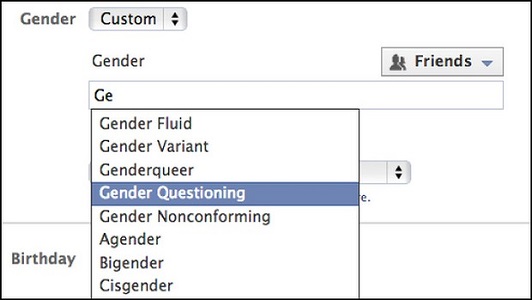 To change your gender, go to your Facebook Timeline and update your Basic info.

Does gender and sex mean the same to you? If so, you need to be enlightened. Sex is biological and is defined by the chromosomes, reproductive organs, testicles or ovaries, internal and external anatomy where as gender is a personal choice. Every sex has both masculine and feminine characteristics. A person can relate himself to either of these or one of the two or none.

Want to know the what these terms means. You can find that out on The Daily Beast.