Nokia has just release the PR 1.3 update fir Nokia N9, Meego based smartphone. This new update brings more than 1000 improvements and bug fixes. This is the third major update to Meego. 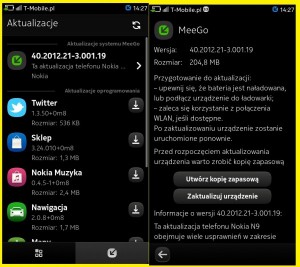 Most of the improvements are related to related to mail, Facebook, Twitter, minor network and connectivity improvements, Nokia Store, Nokia Music, Link, Maps, Drive and AccuWeather.

This update is really surprising as Nokia had announced to switch on windows phone OS and also said that there will be no more devices on Meego OS.

As we know that N9 is the only smartphone running on Meego, Nokia’s effort to update Meego shows that Nokia wants some options open.

Nokia N9 is a nice phone which got huge response from tech experts and users. Nokia must use Meego along with Windows Phone. It will surely help it.

According to reports, Nokia N9 reached more than 1.5 million sales which is more than Lumia devices sale. So We can say tha Nokia’s windows Phone are not doing better tha N9 alone.

Nokia N9 is a nice operating system which is powered by 1 GHz Cortex A8, TI OMAP 3630. It has a 3.9 inches AMOLED capacitive touchscreen with 480 x 854 pixels resolution. It has a 8 mega pixel camera with Geo-tagging, face detection, touch-focus along with a front camera.

We hope to see few more smartphones running on Meego.