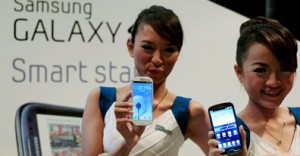 South Korean smartphone giant Samsung has launched its newest smartphone, Samsung Galaxy s3 in India. This smartphone is tagged with the price of 43,180 which is higher than Galaxy s2.

Galaxy S 3 has a Li-Ion 2100 mAh battery which can ensures 11-hour and-40 minute talk time for the device.
This smartphone has a tagline which says, ‘designed for humans’. I am confused why it is? But company says that the smartphone is made for users to make their work easy and perfect.

This smartphone also has a new feature called S voice which is similar to the iPhone’s app Siri. This feature can sense when you’ve picked up your phone and then alerts you about the notifications through vibrations. This feature allows you to control your phone through voice, eg to turn up the volume, and to ask it questions.

Samsung has also tied up with Vodafone India to sell this smartphone in the country.