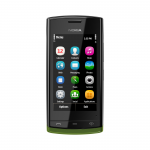 Nokia unveils its symbian based smartphone Nokia 500. It is powered by 1GHz processor having current symbian version, Anna.
It comes with changeable back covers and 3.2 inch capacitive display with resolution 640 x 360. It has a 5 MP camera. It also has a music player with FM and internet radio. It has too many social app with other useful app which helps a lot.
As for memory, the smartphone is equipped with 2GB memory expandable up to 32GB with micro-SD card. For connectivity, there is Bluetooth 2.1, Wi-Fi b/g, 3.5 mm jack and microUSB port.
it has 5-7 hours talk time with 450+ hours standby time.
A BL-4U 1110 mAh Li-Ion battery powers the Nokia 500. The phone supports a talk time of 7 hours on 2G and 5 hours on 3G.