We know that OnePlus will be launching its next flagship phone OnePlus 6T later this month. We have already seen several leaked photos and know that the phone will feature an under-display fingerprint sensor.

Now the phone is listed on Amazon.in for pre-order. The listing was spotted by MySmartPrice and It seems Amazon has taken down because I couldn’t find it. 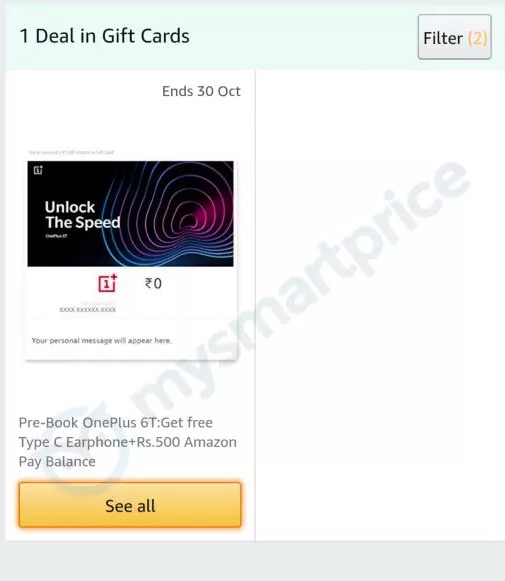 OnePlus 6T will follow the design of recently launched OPPO R17 Pro. So, the phone will feature a 6.4-inch Optic AMOLED screen with Full HD+ resolution, 19.5:9 aspect ratio, and a teardrop notch. It will also feature under display fingerprint sensor that we have already seen in several Oppo phones. The phone will pack Snapdragon 845, 6GB RAM and 8 GB RAM options along with 64gb, 128GB and 256GB storage options.

The phone is expected to come with improved rear and front camera. The company has confirmed that the phone will continue to lack IP rating but it will be water resistant up to some extent. We are still talking rumored specifications, and still waiting for an official detail.

We still do not know when the phone will become official. Stay tuned for all the latest updates.