Both the phones look similar to iPhone X as they feature same kind of design and notch. The phones come in gold, silver and space grey option. Apple team has also upgraded the dust and water resistance of the iPhone. Now these phones are IP68 rated. The body is made of surgical grade stainless steel and glass back is now more durable.

Both the phones feature a notch at the top of the display and notch houses front camera and TrueDepth array.

Face ID has been improved as it now unlocks faster than previous generation. Apple also claims it to be the most secure facial authentication in any smartphone ever.

Next generation iPhone models pack Apple’s 7nm A12 bionic processor. Apple calls it most powerful and smartest chip ever in a smartphone. It has 6-core CPU with 2 performance cores and 4 efficiency cores. Apple has also improved GPU performance up to 50 percent than previous gen. It also has second-generation Neural Engine with 8-core dedicated machine learning processor.

The new iPhone models focus on AR a lot and rear cameras of these phones have been calibrated for AR. They also did demo from Bethesda showing off the A12 powering the new Elder Scrolls Blades game.

Both iPhone XS and iPhone Xs Max will be available 64GB, 256GB, and 512GB storage options. Apple also confirmed that both the phones have wider stereo sound fields.

At the front, it has 7 megapixels front camera with f/2.2 aperture. It also uses IR camera for improved depth of field effect. 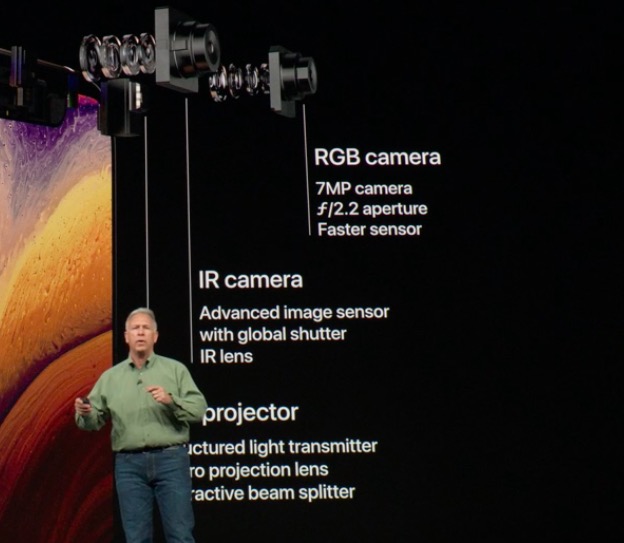 The new A12 Bionic chip offers better image processing, better facial ‘landmarking’ for red eye reduction and improved portrait mode. Apple is introducing Smart HDR that shoots additional frames of highlight and shadow detail. Later it uses Neural Engine to pick the best to combine into an HDR photo. Apple also demonstrated excellent looking photos captured from iPhone XS camera. You can capture awesome portrait shots from the new iPhone models, but Apple has also added an option to change the depth of field later from photos app. While it was shown as a remarkable feature, but many Android phones can do this for long time.

The iPhone Xs also adds support for gigabit-class LTE, and Bluetooth 5.0. Both the phones are getting dual SIM capabilities and will offer Dual SIM Dual Standby mode. In most of the models, it will use eSIM technology for one of the SIMs. In China, the dual physical SIMs will be available to comply with Chinese law. So, iPhone users will be able to use two SIM cards for the first time.

Apple promises up to 21 hours of talk time, 12 hours of internet use, and 13 hours of wireless video playback time for iPhone X. It can be changed up to 50 percent in just 30 minutes.