The Wearable market in India is growing and it has reached to 400,000 units in Q1 2016. These numbers were disclosed by International Data Corporation (IDC). This report claims that fitness bands dominate the wearable market with 87.7 percent market share.

Xiaomi is the market leader in the wearable market in India followed by GoQii. Xiaomi has 27.1% market share to become the top company to sell wearable market. GoQii has around 18.1% market to share to achieve 2nd spot. 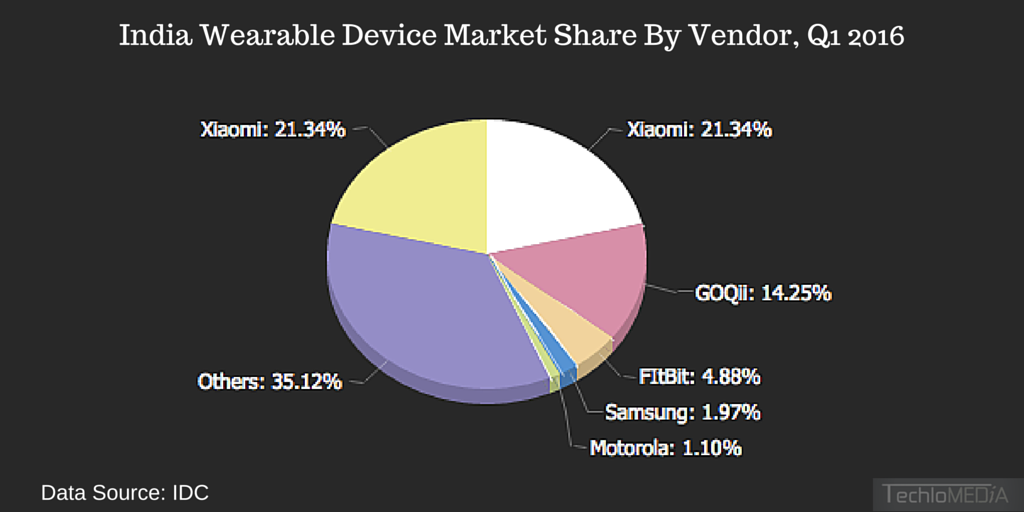 FitBit has also acquired a noticeable market share. It got 6.2 percent market share to become the third popular vendor in the wearable market.

“The wearable market is rapidly gaining traction as it provides an easy health tracking mechanism to the users. In terms of units, Xiaomi and GOQii together contributed over 45 percent share, however Fitbit had maximum market value share. The smart wearables have not yet gained enough ground because of the higher price attached to them,” said Raj Nimesh, Senior Market Analyst, Client Devices at IDC.

Samsung and Motorola had 2.53 percent and 1.42 percent market share.

Wearable market is still growing with slow speed and most of the people are limited to buying fitness bands. The online channel was the most preferred mode of buying wearables. This is because most of the popular vendors are limited to online only sales model. Only Fitbit and Apple are two brands which have made available their wearables in physical stores.

Wearable devices still lack charm. Main reason is that most of the people do not want to carry one more charger. Although fitness bands without display offer long battery backup, people still think a lot before investing money on it.

What are your opinions on this? Share your thoughts with us in comments.