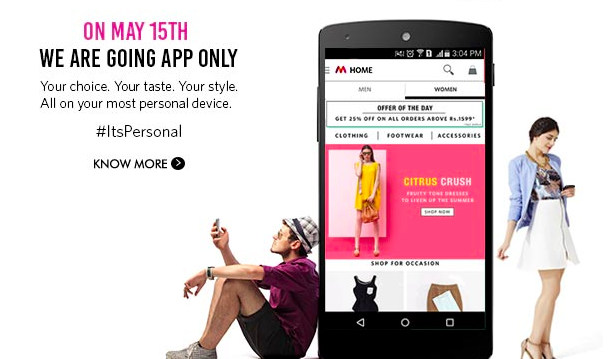 As announced earlier, Myntra has finally ditched the desktop web and moved to app-only strategy. Now you can only access Myntra via its mobile apps. So, download Myntra app if you love shopping on Myntra.

Website of Myntra has been replaced with a page informing users about the changes and asking to download mobile apps with links given to respective app stores.

Myntra is India’s most popular online retailer for fashion products. Most of the users have already been criticizing myntra for this decision. So, it will be interesting to see the effect of shutting down website on Myntra’s business. Myntra decided to take this big step after much research and study of users’ behaviour. It will be interesting to see if the study report is same in real-time.

Flipkart, Myntra’s parent company, has also confirmed that it will soon ditch desktop web to go for app-only strategy. It will take the decision after seeing the results on Myntra’s business.

Myntra already confirmed that it gets around 70% traffic from mobile apps and around 90% sale from mobile apps. So, this decision seems to have not much effect on the business. We also reported why companies want users to come on Mobile app. In that report, we took example of Myntra to prove why this step will not have much effect on company’s business.

People do not like changes, but they do adopt changes in few days. This will also be in this case.

What do you think about Myntra’s decision? Share your views with us via comments.