Samsung India all set to launch its latest smartphone in India named Samsung Galaxy S5. The company started sending out the invites for the event that is scheduled on 27th March 2014. Samsung has also planned to host a press event where they will showcase the phone along with latest Gear devices. 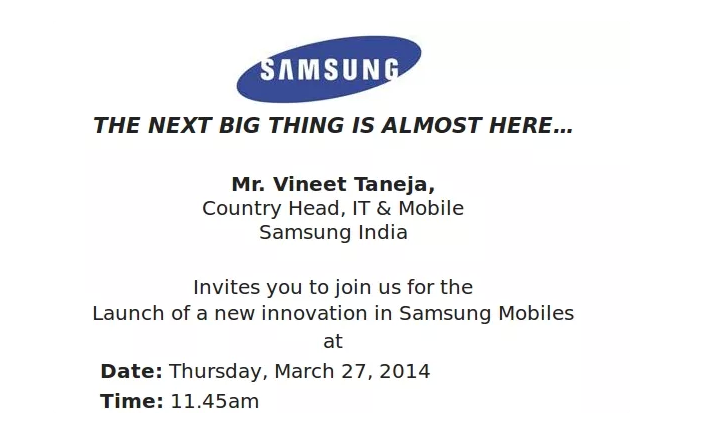 However, There is no word on the availability of the smartphone and also about the pricing but it is expected that the smartphone will go on sale in the beginning of April 11. According to the reports, Samsung will first start the pre orders of the latest smartphone on its e-store after the scheduled event launch. It is also said that Samsung will start displaying the phone in selected Samsung stores the same day.

Talking about the features, Samsung Galaxy S5 has 5.1-inch full HD Super AMOLED display. It is powered by a  Snapdragon 801 quad-core processor. Talking about the photo clicking abilities, Samsung Galaxy S5 has a 16 MP rear or back facing camera. It is also equipped with 2MP front facing camera. The smartphone will run on Android 4.4.2. Other features include 2GB RAM and 16GB internal memory that can be expanded to 32GB with the microSD card. The battery backup of the smartphone seems good as it has a 2800 mAh battery.