Along with Acer Iconia A3 tablet, Acer has also announced Acer Liquid S2 smartphone. It is the successor of Acer Liquid S1 launched back in June this year. Liquid S2 is the first smartphone that can record 4K ultra HD resolution videos. 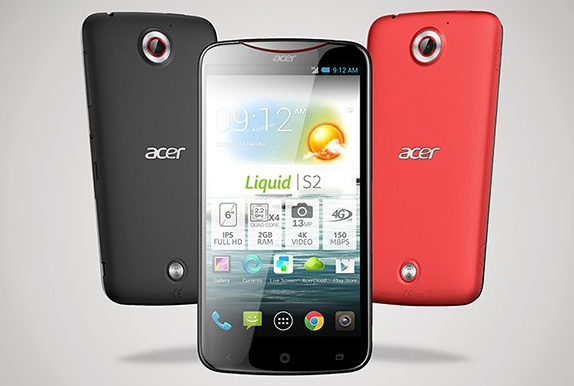 Acer Liquid S2 features a 6 inch display with 1920×1080 pixels resolution. It is powered by a 2.2 GHz quar-core snapdragon 800 processor and runs on Android 4.2.2 Jelly Bean. It features a 13 megapixel rear camera with LED ring flash. It also has a 2 megapixel front camera that can also record 1080p HD videos. It comes with 2 GB RAM and 16 GB internal storage. It also has a microSD card slot to expand storage up to 128 GB.

It also comes with different features like QUick First Shot to capture picture right from unlock screen with automatic center focus by tap. It also has Acer Float UI that allows several Float app windows to open for multitasking.

Acer Liquid S2 will be available in red and black colors. It will go on sale by the end of October. Nothing about pricing has been reveled by the company.