Micromax is planning to launch a new 3D Android smartphone in India. This new smartphone is dubbed as A115 Canvas 3D. Few images of the smartphone have been leaked online but nothing about the release has been specified. 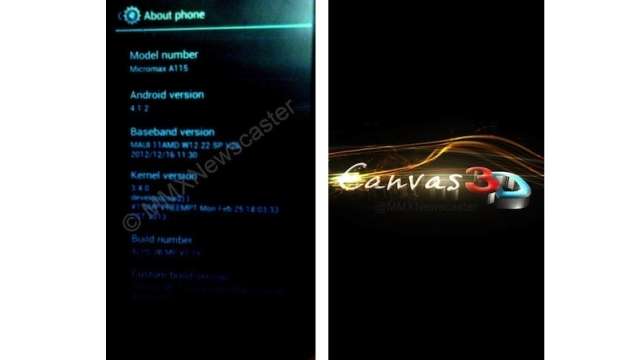 You can see the leaked that we got from MMS Newscaster Twitter account. It clearly shows the model number of the smartphone that is Micromax A115. It will run on Android 4.1.2 Jelly Bean.

HTC and LG already have 3D smartphones in market but none of the companies got success. But Micromax is trying to launch same thing for lower price. As it did with Micromax Canvas HD A116.

According to reports, A115 Canvad 3D will feature a 5 inch WVGA display with 3D support. It will be powered by a MediaTek’s MT6577 dual-core processor. It will come with a 8 megapixel camera, 2 megapixel front camera and 1 GB RAM. Specifications are really good if it is a mid-range smartphone.

Last smartphone of canvas series was really successful. It was Canvas HD A116 and Micromax has sold more than 9000 units in the launch day.

What do you think about this new smartphone? Do you think Micromax is doing well in Smartphones? Share your views via comments.