According to Strategy Analytics, Samsung Galaxy S3 has become best selling smartphone of the world. It has beaten the sales record of iPhone 4S in last quarter.

Samsung Galaxy S3 overtook iPhone by selling 18 millions unit worldwide while Apple has only managed to sell 16.2 million iPhone units. You can the sale stats of this quarter and last quarter in the char below. 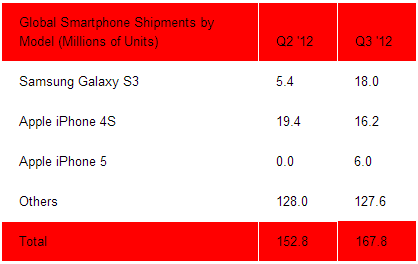 “Samsung’s Galaxy S3 has proven wildly popular with consumers and operators across North America, Europe and Asia. However, the Galaxy S3’s position as the world’s best-selling smartphone model is likely to be short-lived,” Strategy Analytics said.

Although Samsung has managed to beat Apple this quarter. But we can expect few more records from iPhone 5 which is growing fast.

Samsung Galaxy S3 is the latest smartphone by Samsung launched few months back. It comes with so many nice features and runs on Android 4.0 Ice Cream Sandwich. Samsung has also released Jelly Bean update to Galaxy S3 in many countries.

What do you think about Samsung