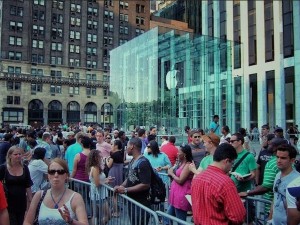 With this new iPhone 5, Apple is breaking all selling records that were previously held by iPhone 4S. Apple has just announced that the company has sold more than 5 million iPhone 5 in just three days of its launch. It was a lucky weekend for the company.

People are crazy about this new iPhone and every one want to have it. Apple is also working its best to deliver the product in time but demand is much more than Apple can supply. Demand has also exceeded the supply so Apple has scheduled many pre-orders for the first week of October.

“Demand for iPhone 5 has been incredible and we are working hard to get an iPhone 5 into the hands of every customer who wants one as quickly as possible,” said Tim Cook, Apple’s CEO about the demand of this new iPhone 5.

“While we have sold out of our initial supply, stores continue to receive iPhone 5 shipments regularly and customers can continue to order online and receive an estimated delivery date. We appreciate everyone’s patience and are working hard to build enough iPhone 5s for everyone,” Cook added.

Apple has also confirmed that iOS 6 which was released on 19 October has been now installed in more than 100 million iDevices.