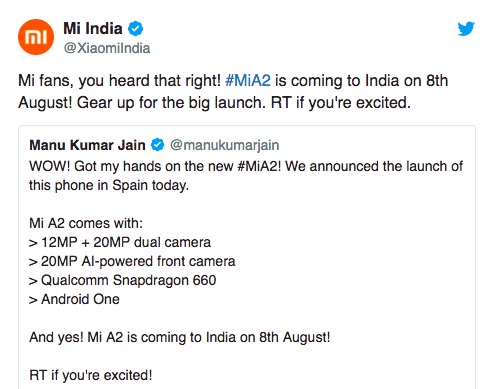 Xiaomi Mi A2 features a 5.99-inch FHD+ Display with Gorilla Glass 5 protection. The phone runs on stock Android 8.1 and will get monthly security updates. It will also get Android P when it will be available. It is powered by octa-core Snapdragon 660 processor. The phone comes in different RAM storage variants including 4GB RAM with 32 GB Storage, 4GB RAM with 64GB storage and 6GB RAM with 128GB storage options.

Mi A2 is expected to start at Rs. 14999 in India. We should know the price when it is launched. Stay tuned.