Fortnite is Now Available For Everyone On iOS

Fortnite has been available on iOS for users who had the invites. Now the company has made it open to all iOS users using compatible iOS device. Developer Epic Games has confirmed the release via Twitter. 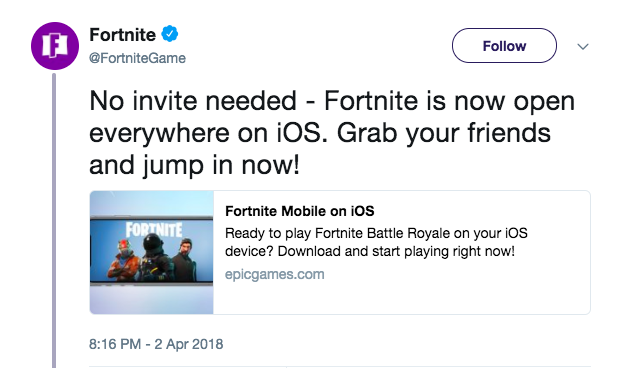 The game is compatible with these iOS devices:

The game comes with weekly challenges to keep itself interesting. The games with same gameplay, same map, same content, same weekly updates. It also supports cross play. Whether your friends are playing on PC, Mac, Xbox One, or PlayStation 4, you will be able to play with them and compete. The only exception to this is PS4 and Xbox One. It is because Sony is refusing to allow cross-play with Xbox One.

The year 2018 was good for Epic Games and it saw rise in sales of Fortnite. The game got popularity, and mainstream recognition. The game’s free-to-play business model helps it in attracting games and in-game purchase helped it in earning money.

After this release, Fortnite is now available for iOS, Xbox One, PlayStation 4, PC, and Mac.

It seems Android users will have to wait little longer. We still don’t have any proper date of its release on Android. Epic Games only says that the game will be coming out soon.