When Xiaomi launched Xiaomi Redmi Note 5 Pro, it confirmed that the phone will get Face Unlock in March. Now the company has started rolling out MIUI V9.2.4.0.NEIMIEK that brings Face Unlock feature to the phone. 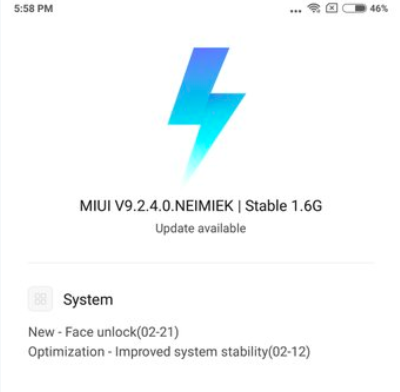 The update is not yet available to all devices and should reach to all in coming days. If you are lucky enough to receive the update, you can go and check the “Lock screen & password” section for this option.

Xiaomi claims that its face detection algorithm scans facial features in roughly 500ms uses high-accuracy matching mechanism to unlock the phone. H However Face unlock is not as secure as fingerprints, it is faster than fingerprints.

The update is big in size and also brings camera improvements and stability optimizations.

Xiaomi has already saw huge response for the phone and managed to sell over 3 Lakh units in fist flash sale within few seconds. The next flash sale is scheduled for 28th February, Wednesday at 12 noon.