After several leaks, finally, Google Pixel 2 and Pixel 2 XL are now official. These phones are the result of Google’s attempt to offer an Android flagship to compete with Apple.

The display is also protected by Gorilla Glass 5. You also get always-on display feature to see time and notifications without turning the display on. 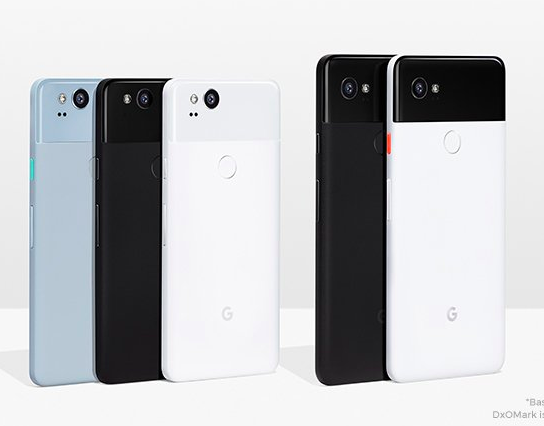 Pixel phones have a metal construction with a glass panel on the top side of the back panel. Both the phones have front-facing stereo speakers to offer better audio experience.

These phones are powered by octa-core Snapdragon 835 processor with 4 GB RAM. Both phones come in 64 and 128GB storage options.

Google claims that Pixel’s camera captures awesome photos. The camera of Pixel 2 scored 98 DXoMark. It is the highest score by any camera. The camera hardware is same as in last year’s Pixel phones but Google’s software has made this camera better. Google Pixel phones come with a 12-megapixel rear camera with a f/1.8 aperture and 8-megapixel front camera.

Google Pixel phone users will get unlimited storage for high-resolution photos and videos on Google Photos.

Google has ditched the headphone jack and you will get USB-C to headphone adapter within the box. Google Pixel 2 XL also has ‘squeezable’ body that allows users to simply apply pressure to the sides of the device in order to trigger Google Assistant.

Both the devices have water resistant IP 67 ratings. Google also claims a full day battery life on new Pixel phones. Pixel 2 comes with 2700 mAh battery and Pixel 2 XL has 3520 mAh battery. The battery can be charged for up to 7 hours of usage in just 15 minutes of charging.

Google also demonstrated the power of augmented reality in the new Pixel phones.

Google has also made it easier to switch from iPhone to Android easier. You can transfer everything including photos, iMessgae, and other data in less than 10 minutes.

Google Pixel 2 price starts $649 for 64 GB variant and Pixel 2 XL starts at a whopping $849 for the 64GB model. BOth phones will be available in Australia, Canada, Germany, India, UK and US in the first phase.