Google Assistant will soon be able to identify songs

Google’s personal digital assistant, Google Assistant will soon be able to identify songs by listening to it. You just need to ask Google Assistant in the form of voice commands and it will start listening to sound being played nearby. If it recognizes the song, you will get the relevant answer. 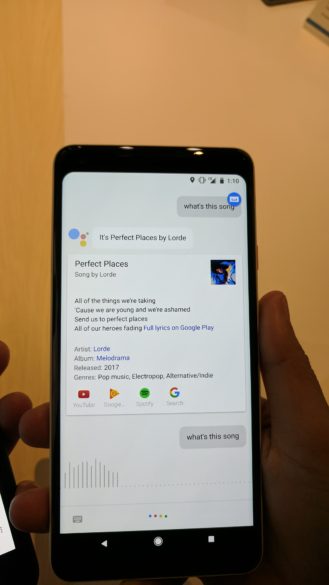 Android Police spotted this feature working on Pixel 2 phones. It seems new Pixel phones are running a slightly updated version of Assistant that has the ability to identify songs. It is not working for my device for now, but I am sure this feature will be rolled out to other Android devices as well.

There are several apps that let you identify what song is this. But having this ability in Google Assistant will bring it to Google Home and other devices with Google Assistant.

In case you missed, Google has announced Pixel 2 and Pixel 2 XL devices. These phones come with high-end features and promise the best camera performance on any phone. It also scored 98 on DxOMark by beating all existing phones.