Last week, we reported Turning Phone Cadenza that offer specs which you cannot even dream to have in coming months. But, Turing has again surprises us with its new Turing Monolith Chaconne with even stranger specs. 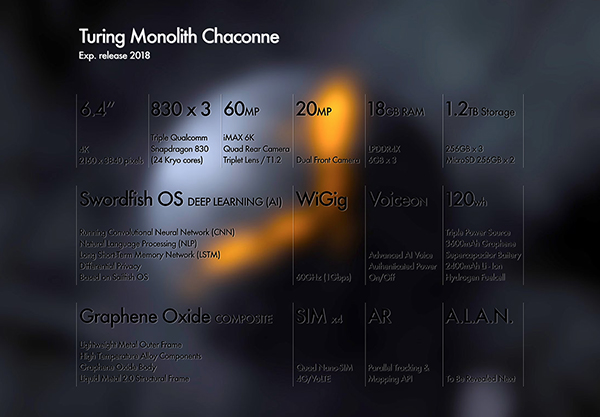 Turning Phone Cadenza was announced with 2 Snapdragon 830 Socs but Turing Monolith Chaconne will offer 3 Snapdragon 830 Socs and 18 GB RAM. It has 6.4-inch 4K display with 768 GB internal storage and two microSD card slots to expand storage up to 1.2TB.

It has 120W hydrogen fuel cell-equipped battery. It will run on Swordfish OS. It boasts to have 60MP quad rear-facing camera, the 20MP dual front-facing camera.

After all these, I think display is weaker than other specs on sheet. 4K display is the only thing which looks normal in this phone.

It has slide-out keyboard, augmented reality with parallel tracking and mapping. There is also something called ALAN which will be confirmed later.

TRI is expecting to release this phone in 2018. I am not sure if this phone will become reality in the expected time frame.