As rumors, Apple has finally made its iPhone SE official with 4-inch display at an Event in Cupertino. It is called SE because SE refers to as a ‘special edition’.

Apple iPhone SE features a 4-inch display with resolution of 640 x 1136 pixels. Unfortunately, it does not support 3D Touch technology. It is powered by a 64-bit A9 chip with M9 motion processor, a dual-core 1.85 GHz Twister processor and PowerVR GT7600 six-core graphics. 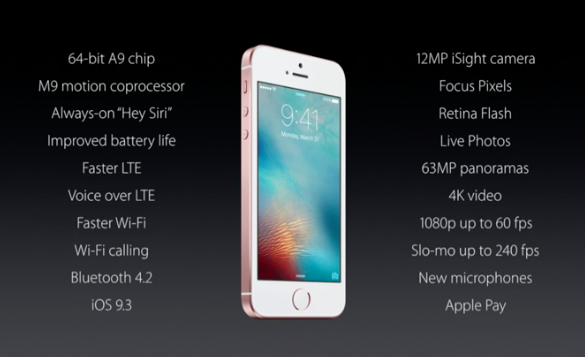 Design of iPhone SE is almost same as iPhone 5S including the chamfered, sharper edges of the device. But this time. edges will be finished in matte. It will be available space grey, silver, gold and rose gold.

It runs on iOS 9.3. The key feature is Night Shift – removes blue light at night to help you sleep better, according to Apple. You can check other features on Apple’s website. The iOS 9.3 update is available from today for all supported devices.

It features a 12 megapixels iSight camera with Retina flash, Focus pixels, Live photos, 1080p up to 60fps and slo-mo recording. It can also capture 4K videos. This is the same camera you have seen on iPhone 6S and iPhone 6S Plus.

Apple’s iPhone 5s will be discontinued permanently and this new iPhone SE will replace it.