Samsung’s next flagship device is rumored to be called as Samsung Galaxy S6. It has been spotted on AnTuTu benchmark site and reveals some specifications. It was confirmed that model name of the smartphone is SM-G925F.

Leaked specification confirms that this smartphone will run on Android 5.0 Lollipop out of the box. It will come with 64-bit octa-core Exynos 7420 processor, Mali-T760 GPU and 3GB of RAM. Other specifications of the smartphone includes 5.5-inch QHD (1440×2560 pixels) resolution, 20 megapixel rear camera, 5 megapixel front camera and 32 GB internal storage. 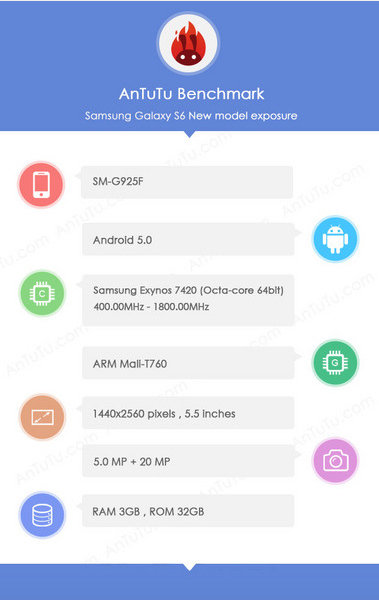 But this smartphone is far away and we cannot confirm when Samsung will announce this next gen flagship smartphone. Recent reports also confirmed that smartphone launch could be delayed due to performance issues with 64 bit Qualcomm Snapdragon 810 processors. Samsung is also expected to launch two variants of Galaxy s6.

It was also reported that Samsung Galaxy S5 successor is code-named project zero and it is being built from scratch. So, there are multiple reports and many rumours. In coming months, we will also get some more leaks.