Although, Apple is struggling in front of Android in market share. But it is better than Android in updating users to latest OS version. According to latest chart available in developer support page, 74% iOS users use iOS 7 while only 22% of users use iOS 6. Apple unveiled iOS 7 back in June and released back in September. In less than 3 months, iOS has upgraded its 74% users to new version of OS. 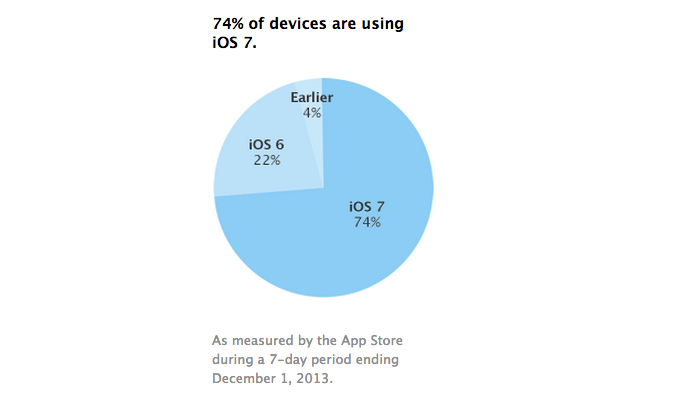 If we compare it with Android version distribution, only 54% Android devices run on Android Jelly Bean. Only 19% users run on Android Kitkat. Android is manufacturer dependent on Android updates. This is the reason it is not as fast as Apple in upgrading users. Android 4.4 Kitkat is already available. But many Indian manufacturers are still working on devices running on ICS and Initial versions of Jelly Bean. And they are also not pushing new updates.

Worst thing is that Android Froyo still has approx 1.6% market share and Gingerbread has approx 24% share in Android distribution.

While most of the users are using iOS 7, but there are many who are unsatisfied. Users have faced many issues and waiting Apple to resolve all. Apple has also released few updates to fix most of the issues.

If you are iOS 7 user, share your views about it with us via comments.