Acer has announced the successor of its Liquid E1 smartphone called Acer Liquid E2. This smartphone is powered by a quad-core processor. It will go on sale in mid-may starting from Belgium, Netherlands, Ukraine, and France, followed by Spain, UK, Italy, Germany and Russia. This smartphone is priced at 229 Euros. 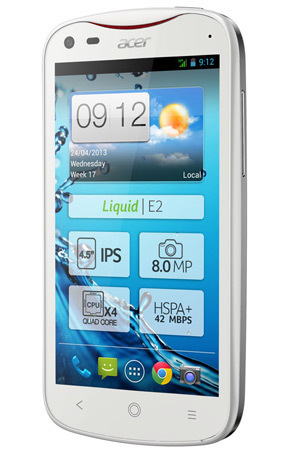 Acer Liquid E2 is powered by a 1.2 GHz MediaTek MT6589 quad-core Cortex-A7 processor. It runs on Android but the version of Android is not clear. We can expect Android Jelly Bean. It is packed with 1 GB RAM and 4 GB internal storage. It also has a microSD card for storage expansion. Graphics of the smartphone is accelerated by PowerVR SGX544MP GPU.

It features a 8 megapixel camera and a 2 megapixel front camera. Camera of this smartphone is also capable of recording crisp 1080p videos at 30 fps. Other connectivity features are HSPA+ support, Wi-Fi, Bluetooth 3.0 and GPS with A-GPS.